Indian Weddings Home Remedies Ayurveda Vastu Yoga Literature
Goa is the smallest state in India and the fourth smallest in terms of population. Read the facts and figures of the beautiful state of Goa in this write-up.
Home : States : Goa 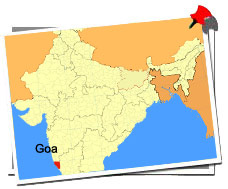 Even the most elaborate words will not suffice to describe India's smallest state - Goa. The dominating Portuguese culture still lingers in every nook and cranny of Goa. The lifestyle and tranquility of the state is very 'in-your- face' and is sure to please. Located in the western region known as the 'Konkan', it sits cheek by jowl with the state of Maharashtra to the north and with Karnataka to the east and south. The beautiful state is flanked by the Arabian Sea on its west. An interesting fact to note is that Goa is India's richest state and its GDP per capita is two and a half times that of the country as a whole. It is a surreal sight as you get to savor a diverse range of cultures, with the rustic Portuguese aura blending in perfectly with an Indian background. It is one of the most tourist friendly destinations in India and attracts a large number of domestic and international tourists annually. It has become even more popular after the mainstream 3-day music festival that happens towards the end of the year called 'SUNBURN'.

It is one of the few states in India that offers gazillion varieties of local fare and street food tempered with Konkan-Portuguese influences. Goa is a typical carnivorous heaven with a few select choices for vegetarian food. Seafood lovers are in for a local spicy surprise! The state's capital is Panaji and Vasco da Gama is the largest city. Margao still has traditional Portuguese style houses and has dominant influences of Catholic and Portuguese cultures. The Portuguese first landed in the 16th century and colonized the state until it became part of India in the year 1961. Goa is acclaimed for its heritage architecture, sun kissed beaches, people and places of worship. Apart from the white sandy beaches and romantic backdrop, the state is renowned for its lush greenery and is a regular hotspot for families and youngsters galore.

Culture of Goa
Goa is absolutely one of a kind in India. The culture of the state is an amalgam of Portuguese and Konkan culture. Goa is a very laid back, chic state with lots of Bohemian influences to it. It was colonized by the Portuguese in the early 16th century and still manages to retain its

Economy Of Goa
Main economic activities of Goa include agriculture, tourism and mining. Though most people may assume that most of the state's income comes only from tourism; the fact is that Goa gets revenue from all sources including fisheries, exports of iron,

History of Goa
The origins of the beach capital of India date back to the 3rd century BC. Having been colonized by the Portuguese for several years, the remnants of the lost culture have seeped their way through into the lifestyle, architecture and even the food of Goa.

Goa Weather
Goa's climate is warm and humid throughout the year because of its coastal location. Although the state is typically in the tropical zone, it has more of a coastal climate. The hottest month in the whole year is during May with soaring temperatures

Tourist Attractions In Goa
Tourism and Goa are synonymous. Goa has been listed as one of the 'Top 10 Hottest Destinations' by a lifestyle magazine. Tourism is the main source of income for the state, and why not? Goa promises its sightseers an endless stretch of sand,