Indian Weddings Home Remedies Ayurveda Vastu Yoga Literature
Get all the information about the beautiful State of Karnataka, its history, geography and its economic conditions.
Home : States : Karnataka 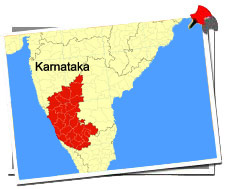 The colorful state of Karnataka was formerly known as Mysore. Karnataka is known for its rich culture and grand traditions, which makes this state very special. The name of the land Karnataka comes from `Kari-nadu` meaning the land of black soil, & some other historian explain that `Karunadu` also means beautiful country. The state got its actual name on November 1, 1973. Situated on the western edge of the Deccan plateau, it is surrounded by Maharashtra and Goa on the north, Andhra Pradesh on the east, and Tamil Nadu and Kerala on the south. Also known as the capital of agarbatti (incense sticks) it is very famous for areca nut, silk, coffee and sandalwood. It is the eighth largest Indian state by area and the ninth largest state in terms of population. The capital of Karnataka is Bangalore, which is called the 'Silicon Valley of India'. It has now become the IT (Information Technology) hub.

The beauty of Karnataka is resplendent through the nature's kaleidoscope at its best with lush green forests, cool blue seas, sparkling white waterfalls, seemingly endless plains and sky touching hills. The history of the state is also filled with fascinating tales about the most powerful empires of ancient and medieval India. It also has a strong base in arts like music in the Indian classical music; the Carnatic (Karnataka Music) and Hindustani traditions. The language is so rich that Kannada language has received the maximum number of Jnanpith awards in India. With so many ancient sites in Karnataka the tourism industry is very successful.

Culture of Karnataka
With a strong lineage of Indian emperors ruling this state, the culture of Karnataka has been shaped by like Mauryas, Chalukyas the Hoysalas, and the Vijayanagar empire. They have left behind a rich cultural heritage that is still evident in the everyday life. Karnataka is also home

Economy of Karnataka
Karnataka has become the hub of IT industry with its growing presence in the city of Bangalore. With one of the highest economic growth rates among all states, Karnataka has been a constant contributor to the progress of the country. The major contributors

History of Karnataka
Steeped in ancient history, Karnataka's history starts with the Mauryas. Later on the state was ruled by Satavahanas for 300 years. The modern state of Karnataka was created on 1 November 1956, with the passage of the States Reorganisation Act. Earlier the state was known as State of Mysore, it was renamed Karnataka

Karnataka Weather
Known for its pleasant climate especially in the hilly areas or high plateau, the weather of Karnataka, is the most important part of the geography of this beautiful & mesmerizing state. Karnataka weather is at its best in Bangalore which is known as an 'air-conditioned city'. Here, the climate is pleasant throughout the year. Moreover, Bangalore gets showers

Tourist Attractions in Karnataka
Karnataka, situated in southern India, has plenty in store for the visitors. Offering a perfect blend historical and modern tourist destination and being blessed with nature's bounty, the state always delights its visitors. The state which is known for its Carnatic music all over the world is home to two of India's world