Indian Weddings Home Remedies Ayurveda Vastu Yoga Literature
Maharasthra is the wealthiest state in India. It is the third largest and second most populous state in India.
Home : States : Maharashtra 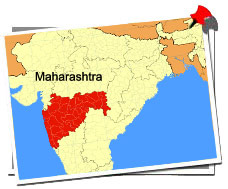 Located in the Southwest region of India, Maharasthra is the wealthiest state in India. Amongst all states, Maharashtra contributes the most to the country's industrial output and its GDP. The state is the second and third largest in terms of population and area, respectively. Surrounded by the Arabian Sea in the west, Maharashtra shares boundary with Gujarat in the northwest, Madhya Pradesh in the north, Andhra Pradesh in the southeast, and Karnataka and Goa in the south. The financial capital of the nation, Mumbai is the capital city of the state. Maharashtra like many other Indian states has a second capital which is the city of Nagpur known all over for its oranges. Due to its huge population Maharashtra is the world's second most populous first-level administrative country sub-division. If Maharashtra were a nation it would be the world's tenth most populous country ahead of Mexico.

The name Maharashtra means the 'The Great State' or 'Great Nation'. The history behind this name comes from 'rathi' meaning a 'Chariot driver', which refers to drivers and builders of chariots who were known as 'maharathis' or 'Fighting Force'. Another source for the state's name is in the Rig Veda where Maharashtra has been mentioned as "Rashtra" then "Rashtrik" in Ashoka's inscriptions and "Maharashtra" afterwards. The name is said to be derived from "Maharashtri" from an old form of Prakrit, an ancient Indian language.

Maharashtra played a significant role in independence struggle. Mumbai was the birthplace of Indian National Congress. Mahatama Gandhi launched Quit India Movement from August Kranti Maidan in Mumbai. The state was also home to a number of leaders who were at the forefront of the freedom struggle. charismatic leaders from Bombay and other cities leading the freedom struggle like Bal Gangadhar Tilak.

Culture of Maharashtra
The unique blending of various cultural affiliations has shaped the culture of the state of Maharashtra. Maharashtra is the land of prosperity, culture, spirituality which has gained growing global recognition as it has preserved its traditions in the wake of advanced industrialization.

Economy of Maharashtra
In terms of the GDP per capita, Maharashtra is one of the richest states in India. The capital of Maharashtra, Mumbai is the headquarters of major banks, financial institutions, insurance companies and mutual funds. It is also known as financial capital of India, playing an important role in the economic development of the state

History of Maharashtra
The history of Maharashtra is filled with tales of courage and valour; just like the string of rulers who ruled over this land. The colorful history of the land is the reason for the rich culture and traditions which are important part of the society today. When you start to date

Maharashtra Weather
Maharashtra has a tropical monsoon climate with summer, winter, monsoon and spring seasons. Though the climate is tropical, the areas in the higher altitude do not experience extremely cold weather. Moreover, the state also consists of two major relief categories.

Tourism In Maharashtra
Maharashtra maybe one of the most modern places in India, but that's not all; it houses several forts, historical monuments, pilgrimage centers, sanctuaries and much more. This state, situated on the western side of India and sited near the Arabian Sea,