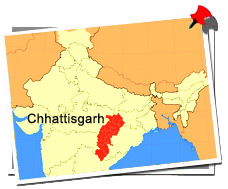 Chhattisgarh, essentially, is a young state having ancient roots. To be found in Central India, Chhattisgarh was formerly a part of Madhya Pradesh and became the 26th state of the Indian Union in the year 2000. This 10th largest state of the country is endowed with the nature's best, together with huge mineral deposits, forest resources, immense waterfalls, chirpy rivers, massive caves, etc. Raipur, the industrial and commercial city, serves as its administrative capital.

Since Chhattisgarh falls under the Torrid Zone, it observes tropical climate where summers are warm and winters are cold. Talking about its ancient roots, the state has been mentioned as Dakshina Kosala in the great epic of Ramayana. Not only is this state rich in minerals, but also in business and industrial prospects. Bhilai Steel Plant, the largest steel plant of India, is located in this picturesque state.

Being one of richest bio-diversity habitats of India, Chhattisgarh is dedicated to become a hub for bio-diesel very soon. Amidst great potential of industries and natural resources, it is contributing appreciably to the country's economy and human resources. It has the largest number of Schedule Tribes; it's also home to innumerable migrants from other parts of the country. Above and beyond, its rich culture imparts wholeness to this state where headway is made without negotiating on ethnicity.

Economy of Chhattisgarh
In the vein of most of the states of India, Chhattisgarh is also inclined towards agriculture. Besides great prospects of power & electricity, the state has seen great rise in the establishment of industries. Chhattisgarh, being a mineral-rich state, contributes 20% in the country's total production of steel and cement.

Chhattisgarh History
The origin of Chhattisgarh dates back to thousands of years. Recently, anthropologists have uncovered evidences of some of the initial human habitations in the rocks and caves of this mythological land. Chhattisgarh has also been mentioned in the legends of the Ramayana and the Mahabharata

Chhattisgarh Weather
Chhattisgarh comes under the hot Torrid Zone and probably that's why the state observes tropical type of climate. Though weather varies from region to region, it's warm in most of the places. Like any other part of India, Chhattisgarh enjoys three seasons, summers, winters, and monsoons.