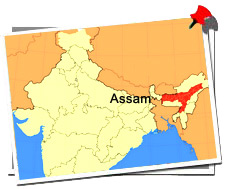 Assam is a picturesque state that is synonymous to tea. With its administrative headquarters at Dispur, Assam is one amongst the Seven Sister States in northeastern India. It claims not only to be largest producer of timber and tea but also possesses the oldest oil refinery in the country. Assam is located just below the eastern Himalayan foothills, and consists of the Brahmaputra and the Barak river valleys plus the Karbi Anglong and the North Cachar Hills.

The state boasts of great cultural heritage, which has hues of various civilizations, yet has managed to maintain its own identity. The chronological account reveals that the region has been existent from thousands of years and has been invaded several times by various dynasties. Assam boasts of rich vegetation, forests and wildlife; it also has numerous reserve forests including the renowned Kaziranga Wildlife Sanctuary. Its biodiversity is acclaimed to be amongst the very few in the world.

Assam has effectively conserved the one-horned Indian rhinoceros from extinction. In fact, it is one of the last wild habitats for the Asian Elephant. Owing to such achievements, Assam is becoming a well-liked destination for wild-life tourism. It is quarters to Kaziranga and Manas, which are applauded as the World Heritage Sites. This state is also recognized for its lush greenery and high rainfall. Assam has got the nature's wealth in the form of mighty river Brahmaputra whose tributaries and oxbow lakes grant the region with a unique hydro-geomorphic and aesthetic setting.

Culture of Assam
Assam, a northeastern state of India, features a hybrid culture that has evolved with times. Its culture is a mixing pot where rituals, customs, heritage, lifestyle, faith & beliefs of various people are assimilated. Be it dance, cuisine, language, arts & crafts, or fairs & festivals, Assam has identified itself with a distinctive cultural heritage. One of the important cultural symbols of the Assamese is Gamocha. It is an integral part of every socio-religious ceremony.

Economy of Assam
Assam is identified for its aromatic tea gardens and as expected, tea is the major source of revenue to this state. Like most of the north-eastern states of India, the economy of Assam is mainly agrarian. About 69% of the state's population is engaged in agricultural activities.

Assam History
Assam has been an inseparable part of India since centuries, though details of its history & origin have lost in times. As interpreted by some scholars, the term 'Assam' is taken from the Sanskrit term 'Asoma' which means matchless or unequaled. According to the current studies, the term has been originated from the original name of the Ahoms, the people who ruled the land for about 600 years before its invasion by the British.

Assam Weather
Assam, essentially, observes temperate climate. Its weather is characterized by heavy downpour and humidity. The hilly areas usually experience sub-alpine climatic condition, while excessive sultriness is observed in the plain lands of Assam. Though summer, winter and monsoons are the three seasons that visit the state, rainy season marks the most of the months of a year.