Indian Weddings Home Remedies Ayurveda Vastu Yoga Literature
Tripura is known to be the third-smallest state of India. To know more about the facts & figures of Tripura, read on.
Home : States : Tripura 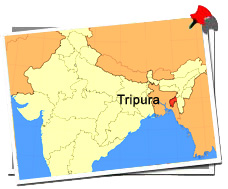 Tripura, the former princely state, is the third smallest state that boasts of unmatched and unspoiled natural beauty. Located in northeastern India, it marks a distinctive combination of communities and cultures that impart an utterly ethnic charm to this state. Tripura, besides being ruled by Maharaja, claims to be a prehistoric land since it founds mention in the ancient epics of the Mahabharata and the Puranas.

Tripura is also the abode of Goddess Tripuri Sundari, who is believed to be one of the 51 Shakti Peethas, as per the Hindu mythology. Being dominated by the Bengalis, the state has Bengali culture in prevalence. Bengali and Kokborok (Tripuri) are the most common languages that are spoken and understood by the majority of people. Tribal people still exist and practice their own set of notions in the far-flung areas of the county.

This small stretch of land is divided into four districts-Dhalai, North Tripura, West Tripura, and South Tripura. Agartala serves as the administrative capital of the state. Tripura's economy, together with various sectors like agriculture, tourism, industry, etc, is growing slowly, but steadily. Here an exotic variety of flora and fauna can be seen in the stretched forests and hilly areas. To sum up, Tripura is though a small state but has immense potential of development.

Culture of Tripura
Tripura encloses a rich cultural heritage of music, fine arts, performing arts, and handicrafts. Being dominated by the Bengalis, the state's prevalent culture is Bengali. As it has numerous diverse ethno-linguistic groups, such as, Tripuris, Jamatia, Reang, Noatia, Koloi, Murasing, Chakma, Halam, Garo, Kuki, Lushai, Mogh, Munda, Oraon, Santhal, and Uchoi, a composite culture has emerged on the whole.

Economy of Tripura
The economy of Tripura is mainly dominated by agriculture and allied activities. In fact, agricultural activities provide employment to about 64% of the state's workforce. Earlier, the state development hindered for long due to its remote location, lack of power facilities, undeveloped transport and communication network.

Tripura History
The history of Tripura dates back to primeval era of the great Indian epics, such as, the Mahabharata, the Puranas; and pillar inscriptions of Emperor Ashoka. Tripura has a long story of its origin, its distinctive tribal culture and a captivating folklore. It was called Kirat Desh in the earliest times.

Tripura Weather
Tripura generally observes tropical weather, marked by heat and humidity. Summers, winters and monsoons are the three seasons enjoyed by this state. Where summers extend from the month of March till May, the temperature soars to the maximum of 35°C. In the late-May, pre-monsoon showers soak the region. Monsoon season formally arrives in June and prevails till September.