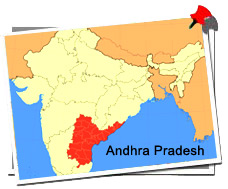 Andhra Pradesh, the abode of Lord Tirupati, is a wonderful state located in the southern part of India. States, like Karnataka, Tamil Nadu, Maharashtra, Chattisgarh, and Orissa snuggle this wonderful state cozily from three sides, whereas the mighty waters of the Bay of Bengal provides a picturesque coastline to it. This fourth-largest state of India brags of more than 500 tourist sites, including ancient monuments, heritage sites, affluent temples, exotic flora & fauna, startling hill-stations, cascading watercourses, and elevated hills.

It doesn't only embrace the world's richest temple, but also the largest masonry dam in the world-Nagarjunasagar. Its vat of cultural heritage comprises diverse range of dances, music, religions, people, arts & crafts, and fairs & festivals. Dates back to the 5th century BC, it's a pious land that has been mentioned in the religious epics of Mahabharata and Aitareya Brahmana. This glorious terra firma is the witness to the royal dynasties and empires of Mauryas, Pallavas, Chalukyas, Cholas, Tughlaq, Outb Shahi etc.

Andhra Pradesh enjoys tropical, and actually hot and humid weather but the plethora of lakes, rivers, and the vast sea-waters never let its dwellers get scorched. With Hyderabad as its capital, Andhra has got an international recognition owing to its great prospects in the field of information technology. The state has grown rapidly in terms of economy though it is still very much enrooted in its agricultural roots, which also makes it count amongst the top exporters of agricultural products in India.

Culture of Andhra Pradesh
Andhra Pradesh has contributed immensely in defining the cultural heritage of India. Its rich culture is discernible in its mellow music, dazzling dances, crispy cuisine, aboriginal arts &crafts, pious people, religions, and fairs & festivals. The dynasties and empires that ruled the state during different periods actually swayed and shaped the state's culture.

Economy of Andhra Pradesh
Andhra Pradesh, the Rice Bowl of India, has recorded over 5.5% yearly economic growth rate constantly from the last twenty years. Not only this, the state thrives in agriculture, and has been a regular exporter of many agricultural products. Owing to its mineral wealth and advancement in the IT, it has joined the league of the most industrially developed states of India.

Andhra Pradesh History
The earliest mention of Andhra kingdom was found in the Sanskrit epics, like Aitareya Brahmana and Mahabharata. Regarding the history and origin of this vast state, some inscriptions revealed that there used to be a kingdom in the coast, along with Pratipalapura, ruled by Kuberaka in the 5th century BC. Probably, it had been the oldest known kingdom in South India.

Andhra Pradesh Weather
Andhra Pradesh essentially observes tropical type of climate though small variations can be experienced with altitude and pelagic influence. Like any other place in India, this too, enjoys three seasons-summers, monsoons, and winters. If compared with the low valleys and the coastal region, the weather is moderate in plateau regions.