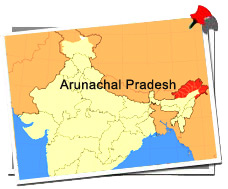 From east, the periphery of India starts with this exotic land of dawn-lit of mysterious places and glistening rivers. What had been formerly called North East Frontier Agency is presently the largest state amongst the seven sister states of the North-East. Arunachal Pradesh extends between latitudes 26.42' N-29.30' N and longitudes 90.36' E-97.30' E, sharing its international borders with Myanmar, Bhutan, and Tibet.

Itanagar, the state's largest city, serves as its political as well as industrial capital. The economy of Arunachal Pradesh is soon progressing owing to the revival of handicrafts, improved variations in agriculture processes, forest products and great tourism prospects. Nestled cozily in the foothills of the Himalayas, Arunachal Pradesh is amongst the few places in the world where you can see snow-capped peaks and pine-clad mountains at a time. Moreover, it is home to the most astounding variety of orchids that dot the state with their soothing presence.

Not only this, its historical evidences and references in the ancient epics make this state even more fascinating. Festivals, which are celebrated with true jovial spirits, are another attraction, and in fact, a good reason for people to be there. Amidst stunning hill-stations, divine monasteries, striking flora & fauna, amazing arts & crafts, rich food, salubrious weather, lively festivals, and above all, scenic views; Arunachal Pradesh appears to be a true enticer for tourists around the world.

Culture of Arunachal Pradesh
Arunachal Pradesh, the Land of Rising Sun, is much celebrated for its natural beauty, but very few people know that this Indian state has a great cultural background too. Its god-fearing people celebrate numerous festivals round the year, together with their own set of rituals, music and dance.

Arunachal Pradesh History
About the origin of Arunachal Pradesh, the earliest citations are found in the prehistoric epics of Mahabharata, Ramayana and other spiritual legends. The historical characters, such as Princess Rukmini, King Bhismaka and Lord Parashuram, were reported to be from the same region.

Arunachal Pradesh Weather
In proportion to the altitude, the weather of Arunachal Pradesh differs, i.e. areas sited at higher altitude observe tundra climate, areas at lesser elevation enjoy temperate weather, and sea-level areas experience sub-tropical climate. In the Upper Himalayas, where elevation is really high, alpine or tundra type of weather is experienced while temperate climate is enjoyed in the Middle Himalayas.