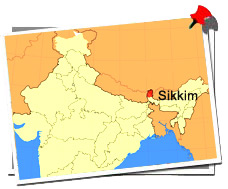 Snuggled cozily in the Himalayas, Sikkim is the second smallest and the least populated state of India. This thumb-shaped state is landlocked by Nepal, Tibet, Bhutan, and the Indian state of West Bengal from all the four sides. Also called ‘Indrakil' or the Garden of Indra, Sikkim is an ancient land that has been mentioned in the religious scriptures of the Hindus. Its glorious history utters that this state has been influenced by the neighboring countries and their cultures. The ‘Lepchas' who were the very first inhabitants of Sikkim fashioned the customs and traditions of this state, while keeping their own distinctiveness alive.

The seeds of Buddhism were sown by Guru Rinpoche, who happened to pass through this lovely state in the 9th century. Gone is the history, but the impact that this beautiful has made on the minds of people would certainly be remembered for the ages to come. As the economy of Sikkim is growing at a fast pace, it has been found, tourism prospects are contributing to the major part of state's revenue. Gangtok, the picturesque hill-station in the north-east, serves as the state's administrative capital.

Sikkim also holds the distinction of embracing the world's third highest peak, Kanchenjunga, in its periphery. It doesn't only enjoy temperate, salubrious climate but also a superb location, accompanied by lakes, rivers, springs, flora & fauna, snow-clad mountains, etc. Though people of different origins have settled here, their harmonious approach perks up with the grand celebration of fairs and festivals. Sikkim, undoubtedly, is a peaceful, serene state that is increasingly getting popular due to its scenic beauty and biodiversity.

Culture of Sikkim
Sikkim is the melting pot of various cultures. Like any other place, its culture is represented by its scrumptious cuisine, lively people, devout religion, jovial language, indigenous art & crafts, melodious music, and vibrant dance. Sikkim has emerged with its own distinct ethnicity even after being influenced by numerous cultures.

Economy of Sikkim
Resembling the most north-eastern states, Sikkim economy is primarily agrarian. However, there are other factors too, that define the state's economy, like agriculture, horticulture, tourism, mining, forestry, industries, etc. An interesting fact about the economy is that the factors are interdependent, for instance, the tourism industry is reliant on forestry and vice versa.

Sikkim History
Actually little is known about the history & origin of Sikkim, however, this article aims to capture the gist of the times gone by. It is said that 'Lepchas' arrived on the domain of Sikkim first. Soon after, they got engrossed with other communities. In the 9th century, Guru Rinpoche, who was a Buddhist saint, happened to pass through the region.

Sikkim Weather
Sikkim basically observes temperate climate; it enjoys five seasons, including summer, winter, monsoon, autumn and spring. Being sprawled in an area of 7,096 km˛, Sikkim stretches from an altitude of 280 mtr to 8,585 mtr. Due to such diverse altitudes, it experiences tropical, temperate and frigid weather in different regions.