Indian Weddings Home Remedies Ayurveda Vastu Yoga Literature
Bihar is one of the oldest human inhabited places in the world. It is the 12th largest and 3rd most populous state in India. Explore more facts about this state from this article.
Home : States : Bihar 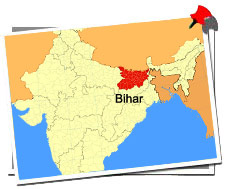 The twelfth largest and third most populous state in India, Bihar, is located in the eastern part of the country. With Patna as its capital, Bihar now consists of 38 districts and covers a total area of 94,163 km2. Bihar shares interstate border with Jharkhand, Uttar Pradesh and West Bengal and international border with Nepal. Bihar is one of the oldest inhabited places in the world and has rich cultural heritage. It derived its name from Sanskrit and Pali word 'Vihara' meaning 'Abode',. Ancient Bihar consisted of Anga, Mithila/Videha, Magadha and Vajji/Vrijji, and was the center of culture, power and education. Bihar was an important educational center with major universities like Nalanda and Vikramashila, until it was totally swept away by Muhammad Bin Bakhtiar Khilji during his invasion into India. Divided by Ganges River into two unequal parts, Bihar is a vast and highly fertile plain. Bihar holds an important place in Indian history, culture and heritage. Once the seat of Maurya dynasty, this place is associated with the major events in the life of Lord Buddha.

The economy of Bihar revolves around agriculture and the state accounts for 65% of India's total Litchi production. Other important crops cultivated in this state include mango, pineapple, guava, brinjal, cauliflower, lady's finger and cabbage. Though the official languages of the state include: Hindi, Urdu and Maithili, there are other languages like Bhojpuri, Magadhi and Angika which are spoken by the people of Bihar. Famous for Madhubani paintings, Bihar is home to many indigenous art forms. Bihar is a land of innumerable festivals as well as a major pilgrimage center for Hindus, Buddhists, Jains, Muslims and Sikhs. Located in the eastern part of India, Bihar experiences extreme climates in summer and winter.

Culture of Bihar
Esteemed as one of the oldest human inhabited place, Bihar is the twelfth largest and third most populous state in India. With Patna as its capital as well as the largest city, Bihar is home to many important pilgrimage centers of almost all religions. Referred as Magadha in ancient texts, Bihar is marked

Economy Of Bihar
Located in the eastern part of India, Bihar is one of the fast growing states of India. country. Bihar's economic history takes back to Mauryan Empire which depended on agriculture for the main source of income. Though third largest in terms of population,

Bihar History
The Indian state of Bihar is noted for its varied history which traces back to Ancient India. Bihar is referred to as Magadha in ancient Indian History and also in Hindu Epics and is one of the oldest inhabited places in the world. Ancient Bihar, Magadha, was ruled by powerful dynasties like Maurya and Gupta Dynasties

Bihar Weather
Located in the eastern part of India, Bihar is a state with rich cultural heritage and is one of the oldest inhabited places in the world. Climate is one of the major reasons that made Bihar a major agricultural hub, which might had made people inhabit this region in ancient times. Because of its geographical location,

Tourist Attractions In Bihar
With a history of human inhabitation for more than 3000 years, Bihar is home to many tourist attractions like heritage sites, monuments and shrines rather than scenic nature or hill stations. Every tourist spot in Bihar has some legend associated with it and about 6 million people visit this state every year.
Facts And Figures