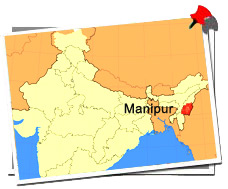 Renowned for its untouched natural beauty, Manipur is a small state in northeastern India. It shares its state borders with Nagaland, Mizoram, and Assam whilst the national borders with Myanmar. Manipur literally means ‘the jeweled land or the land of jewels' and certainly, this land is opulently festooned in the nature's splendor. Since it is regarded as a sensitive border area, foreign nationals are required to have Restricted Area Permit to enter the state.

As it founds mention in the epic of Mahabharata, Manipur is believed to be a part of India since times immemorial. The state officially has a total of 9 districts - Bishnupur, Chandel, Churachandpur, Imphal East, Imphal West, Senapati, Tamenglong, Thoubal, and Ukhrul. Manipur is marked with hill ranges, covered with forests, which also contributes significantly to the state's economy by noteworthy forest resources.

Imphal, the largest city in the state, serves as the administrative capital of Manipur. The major ethnic group dwelling in the state is of Meiteis. In fact, their language, Meiteilon (also called Manipuri) has become the state language as well as one of the national languages. Manipur is also famous for its various graceful dance forms, though only Manipuri dance has attained the recognition of an Indian Classical Dance.

Culture of Manipur
Manipur, a beautiful northeastern state of India, boasts of a rich culture. In the company of vibrant dances and music, the Manipuris find ample of reasons in their fairs & festivals for celebration. Though the lovely people are superstitious sometimes, their belief in religion and customs is certainly creditable.

Economy of Manipur
In the vein of most of the states of India, Chhattisgarh is also inclined towards agriculture. Besides great prospects of power & electricity, the state has seen great rise in the establishment of industries. Chhattisgarh, being a mineral-rich state, contributes 20% in the country's total production of steel and cement.

Manipur History
As per the royal chronicle, or Cheitharol Kumbaba, the region of Manipur, India, was established in the 1st century AD. It was a former kingdom, formed by the unification of ten clans under the Ningthouja clan. The region has historical significance as well - it had been the site of trade routes between India and Myanmar and also served as the arena for battle between the Japanese and the Allied forces, during World War II.

Manipur Weather
Manipur, typically, observes moderate climate throughout the year. Depending upon the altitude, the climate ranges from tropical to temperate. Though the state enjoys all the three seasons of summers, winters, and monsoons; precipitation dominates the valley for most of the year.