Indian Weddings Home Remedies Ayurveda Vastu Yoga Literature
All the important facts and figures on the area, geography, climate etc. pertaining to the state of Gujarat have been compiled in the article below in a tabular form. Read on to know.
Home : States : Gujarat 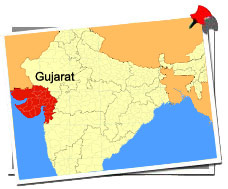 Gujarat, a state in western India with an area of 196,024 km˛ has a population of more than 60 million. It has a coastline of 1,600 km most of which lies on the Kathiawar peninsula and is dotted with 41 ports; 1 major, 11 intermediate and 29 minor ports. The state of Gujarat borders Rajasthan to the north, Maharashtra to the south, Madhya Pradesh to the east and the Arabian Sea as well as the Pakistani province of Sindh to the west. The capital of Gujarat is Gandhinagar, while Ahmedabad is its largest city. The biggest river of Gujarat is Narmada followed by Tapti, although Sabarmati spans across the longest area in the state. Gujarat is climatically moist in the southern districts and dry in the northern region. The Arabian Sea and the Gulf of Cambay reduce the temperature and render the climate more pleasant and healthy. Gujarat with its historical significance and cultural heritage constitutes some of the most popular tourist destinations in the country.

Gujarat has some of the major sites from the ancient Indus Valley Civilization, such as Lothal and Dholavira. Lothal is said to be one of the world's first ports. Gujarat's coastal cities, mainly Bharuch and Khambhat, served as ports and trading centers during the Maurya and the Gupta Empire. In recent time around 50 important settlements belonging to the Indus Valley Civilization have been discovered in Gujarat. There are historical evidences of commerce and trade relations that existed between the state of Gujarat and Sumer in the Persian Gulf during the time period of 1000 to 750 BC.

Culture Of Gujarat
Gujarat which derives its name from the term 'Gujjar Rashtra' constitutes a culture which is formed out of mingling of diverse ethnic folks. The flourishing state of Gujarat with its cultural diversity forms an integral part of the Indian culture and has long been

Economy of Gujarat
Over the years Gujarat has evolved into one of the most preferred destinations for industrial investment in the country. Blessed with a variegated and affluent natural resource base, an abundant supply of skilled manpower and sound infrastructure facilities

History of Gujarat
The history of Gujarat can be traced back to as early as the settlements of the Indus Valley Civilization, whose evidence can be found in places like Lothal and Dholavira. Evidences also suggest that the coastal cities of Gujarat, mainly Bharuch, were used as ports

Gujarat Weather
Climatically, a year in Gujarat can be divided into three seasons, the winter from November to February, the summer from March to May and monsoon season from June to September, with October being the intervening month. There is a great diversity in the climatic conditions across the state of Gujarat

Tourist Attractions In Gujarat
Gujarat with its historical inheritance and cultural diversity has been one of the most popular tourist destinations in India. With its ancient cave paintings, natural caves and historical murals Gujarat harbors a range of tourist hotspots, those offer a fascinating