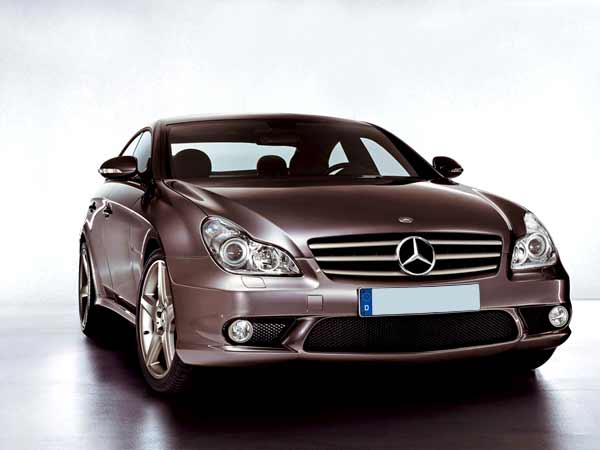 Radiating style, class and luxury, Mercedes Benz is a subsidiary of parent company, Daimler AG. A major player in the automotive industry, the company's product portfolio boasts of a diverse range of automobiles, right from small cars, sports cars and luxury sedans, to versatile vans, heavy-duty trucks and comfortable coaches. Founded by Karl Benz, the company created its first automobile in the January of 1886. Headquartered in Stuttgart, Germany, Mercedes-Benz automobiles have tremendously expanded since inception, and are, today, available in more than 129 countries all over the world.

Mercedes-Benz made its debut in the Indian automobile industry in the year 1994. A joint venture between Daimler-Benz and Telco, the company came to be known as DaimlerChrysler India Private Ltd, after the merger of its parent company, Daimler, with Chrysler. However, in 2007, with DaimlerChrysler's selling off its greater part of equity shares to Chrysler, the company was renamed as Mercedes-Benz India. A fully owned subsidiary of Daimler AG, the company has its headquarters in Pune. Mercedes Benz is not only associated with local production of Mercedes-Benz cars, but is also involved with global sourcing of auto components and captive automotive technology research and development.

Catering to the luxury segment of vehicles in India, Mercedes Benz produces cars for the cream of the society. Right from its initiation, the company has been producing cars for the elite society residing in India and the world. The automaker is well known for rendering its clients unmatched comfort, luxury and class-leading performance. The Mercedes-Benz series available in India include the luxury sedans - C-Class, E-Class and S-Class. Apart from this, the company's product portfolio also includes CL-Class (two-door coupe), CLS-Class (four-door coupe), M-Class (off-roader), SL-Class (roadster) and SLK-Class (convertible) to the consumers. To know more about each of the cars, read through the following lines.

Mercedes-Benz CLS
Mercedes Benz CLS is a four-door car combining the elegance and dynamism of a coupe with the comfort and practicality of a saloon. It has alloy wheels and sporty front which add to its elegance. It has a classic look and an inimitable style, making its occupants feel proud about it.

Mercedes Benz E-Class
Mercedes Benz E Class is nothing less than a luxury cabin running on the road. The car flaunts all attributes associated with brand Mercedes Benz. The E class has additionally-designed and spruced-up style enhancements to accentuate the Mercedes-Benz merchandise.

Mercedes Benz SLK-Class
Mercedes SLK is a Coupe and Cabriolet moulded into one. The sports roadster transforms itself into a classic Coupe in only 22 seconds, providing all the advantages of a Coupe in terms of aerodynamics, aero-acoustics and safety. It is a convertible that sacrifices little in performance and excels at luxury and prestige.

Mercedes-Benz SL-500
Any car enthusiast who sees Mercedes Benz SL 500 feels an urge to have a ride on it. It is such an irresistible sporting experience. It is a powerful roadster and inspires nothing less than pure excitement. Its front radiates power and agility, while the car as a whole exudes elegance. It is a car which puts virtually all of the German company's formidable armory of technology at the driver's disposal. It is one of the fastest and safest cars on a winding road.

Mercedes SL- Class Roadster
The machines that fall under the Mercedes Benz SL-Class are roadsters that have been manufactured by the company since 1954. The cars have been known as much for their power, as they have been known for their class. The classification ‘SL’ owes its existence to the German ‘Sport Leicht’ or ‘Sport Light’.

Mercedes S-Class Saloon
There is a very fine line that differentiates class from power. With cars, it is often noticed that the more the power, the lesser the class and more the class, the lesser the power. However, with the Mercedes Benz S-Class, everything changes. The company with the S-Class has managed to marry off class to power and the end result is there for the whole world to lust after.

Mercedes GL-Class Off Roader
For those who like their cars to stand out in a crowd, Mercedes is a choice that is vouched for by people across the world. As there are many out there who enjoy off-road travel, Mercedes came up with the idea of launching GL class and thus did something that it has always been known for.

Mercedes Benz E-Class Saloon
Looks are not always the yardstick for buying, and as far as cars are concerned, buyers want something that will make their journeys more comfortable, pleasing, and relaxing. Apart from the functionalities, buyers never want to compromise on safety aspects. Mercedes Benz, the famed German automobile giant is one such company that understands perfectly well your need for elegant style and robust tenability.

Mercedes-Benz E-Class Coupe
Mercedes-Benz is not just a name, but it is name to reckon with in the automobile industry. Founded in the 1880s, the company has stood the test of time and till date has a formidable market presence. Among the innumerable cars coming out of its inventory the one that has left a major imprint world-over is the Mercedes E-class.

Mercedes E-Class Cabriolet
You for sure know what a cab is. How did the term come about? Well, the word ‘cab’ owes its origin to the French language. ‘Cabriolet’ in French means to ‘to cavort’ or’ ‘to cut a caper’. By the 1700s, the term began to mean a ‘light, two-wheeled horse carriage with a folding leather top’. Gradually, any carriage for hire was referred to as a ‘cab’ and so we have the cabs of today, known as taxis in some countries.

Mercedes C- Class Saloon
The German car giant Mercedes Benz continues with its innovative car manufacturing. After introducing the award-winning C-class in 1993 to make their cars rank better on the affordability index, the latest entrant in the market to be launched this year is the C-class saloon. It is a lot sleeker and sharper than the earlier C-class model and has a tinge of BMW 3-series to it.

Mercedes-Benz R-Class
Mercedes Benz was founded by Karl Benz and Gottlieb Daimler in 1886. It was an age when the invention of the steam engine had opened a plethora of opportunities. Innovation was at its zenith. Road transport was in the process of being motorized. Had it not been for their successful collaboration, this German automobile giant would never have seen light of the day.