Here is a brief profile and biography of VS Naipaul. Read for information on V.S. Naipaul
Home : Famous Indians : Writers : V.S. Naipaul Profile 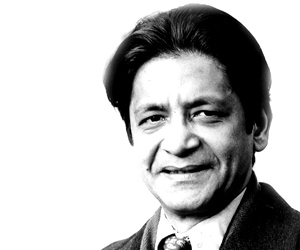 Born: August 17, 1932
Achievement: Won Nobel Prize in Literature in 2001; Won the Booker Prize in 1971 and became the first person of Indian origin do so.

V.S. Naipaul is a noble laureate who won Nobel Prize in Literature in 2001. Though of Indian origin, V.S. Naipaul was born in Trinidad and is currently a British citizen.

V.S. Naipaul (Sir Vidiadhar Surajprasad Naipaul) was born on August 17, 1932, at Chaguanas, Trinidad and Tobago. His forefathers came as indentured labourers from India. Naipaul's upbringing familiarised him with every sort of deprivation, material and cultural. He got a scholarship to Oxford University and thus came to England. It was at Oxford that V.S. Naipaul discovered the writer in him.

V.S. Naipaul traveled extensively in India and Africa. At that time decolonisation was taking place and Sir V.S. Naipaul observed from close quarters the resulting turmoil of emotions. These observations were reflected in his writings. V.S. Naipaul has written about slavery, revolution, guerrillas, corrupt politicians, the poor and the oppressed, interpreting the rages so deeply rooted in our societies.

V.S. Naipaul's fiction and especially his travel writing have been criticised for their allegedly unsympathetic portrayal of the Third World. But his supporters argue that he is actually an advocate for a more realistic development of the Third World. V.S. Naipaul's contempt for many aspects of liberal orthodoxy is uncompromising, but at the same time he has exhibited an open-mindedness toward some Third World leaders and cultures that isn't found in western writers.

V.S. Naipaul has discussed Islam in several of his books and he has been criticised for harping on negative aspects of Islam. V.S. Naipaul's support for Hindutva has also been controversial. He has been quoted describing the destruction of the Babri Mosque as a "creative passion", and the invasion of Babur in the 16th century as a "mortal wound."

V.S. Naipaul has won several awards and honors for his writings. In 1971, Naipaul won the Booker Prize for his book "In a Free State" and became the first person of Indian origin do so. He won the Jerusalem Prize in 1983 and Nobel Prize for Literature in 2001.