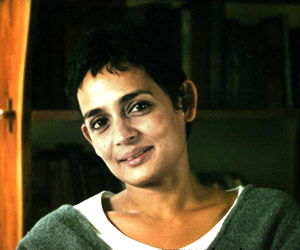 Arundhati Roy is a famous Indian novelist and social activist. Arundhati Roy came into limelight in 1997 when she won the Booker Prize for her first novel "The God of Small Things". She was awarded Sydney Peace Prize in 2004.

Arundhati Roy was born November 24, 1961 in Assam. Her mother was a Keralite Christian and her father was a Bengali Hindu. Their marriage was not successful and Arundhati Roy spent her childhood years in Aymanam, Kerala with her mother. Arundhati's mother, who was a prominent social activist, founded an independent school and taught her daughter informally.

At age of sixteen Arundhati left home, and eventually enrolled at the Delhi School of Architecture. There she met her first husband, Gerard Da Cunha, a fellow architecture student. Their marriage lasted four years. Both of them did not have great love for architecture, so they quit their profession and went off to Goa. They used to make cake and sell it on the beach to make living. This continued for seven months after which Arundhati returned back to Delhi.

She took a job at the National Institute of Urban Affairs, rented a barsati near the dargah at Nizamuddin and hired a bicycle. One day film director Pradeep Krishen saw her cycling down a street and offered her a small role of tribal girl in the film "Massey Saab". Arundhati Roy accepted the role after initial reservations. She later on married Pradeep Krishen. Meanwhile, Arundhati got a scholarship to go to Italy for eight months to study the restoration of monuments.

After returning from Italy Arundhati Roy linked with her husband to planned a 26 episode television serial for Doordarshan called the Banyan Tree. The serial was later scrapped. She wrote screenplays for a couple of TV films - "In Which Annie Gives It Those Ones" and "Electric Moon". Arundhati Roy also wrote screenplay for Shekhar Kapur's controversial film 'Bandit Queen'. The controversy escalated into a court case, after which Arundhati Roy retired to private life to concentrate on her writing, which eventually resulted in "The God of Small Things".

After winning the Booker Prize for "The God of Small Things", Arundhati Roy has concentrated her writings on political issues. She has written on varied topics such as Narmada Dam project, India's nuclear weapons and American power giant Enron's activities in India. Arundhati Roy strongly associated with anti-globalization movement and is a staunch critic of neo-imperialism.