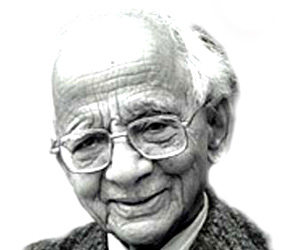 Born - 23 November 1897
Died - 1999
Achievements - Nirad C. Chaudhuri was an eminent Bengali Indian writer and journalist. He was appointed the political speaker for the Calcutta branch of the All India Radio and has also edited several prestigious magazines. He will always be remembered for his phenomenal biography 'The Autobiography of an Unknown Indian' published in the year 1951.

Nirad C. Chaudhuri was a famous Bengali Indian writer. He was born on 23 November in 1897 at Kishoreganj located in the Mymensingh district of East Bengal of those days or today's Bangladesh. He studied at Kishorganj and then in Kolkata city. As a student of history at the Scottish Church College, Nirad C Chaudhuri topped the University of Calcutta, which was a rare distinction at that time. Read on further about the biography of Nirad C Chaudhuri.

Nirad C Chaudhuri began his career as clerk in the accounting department of the Indian Army and also started writing stories for popular magazines. His first article on Bengali poet, Bharat Chandra was published in Modern Review, a popular English magazine of those times. After this, he entered the field of journalism and began editing various magazines. Nirad C Chaudhuri also temporarily introduced two highly esteemed Bengali magazines, Samasamayik and Notun Patrika.

Finally in the year 1938, Nirad bagged a job as the secretary to the great Indian political leader, Sarat Chandra Bose. Due to this, he got ample opportunity to meet various renowned leaders of India like Mahatma Gandhi, Jawaharlal Nehru and others. In the year 1932, Nirad C Chaudhuri married Amiya Dhar who was herself a very prolific writer. Later on, Nirad C Chaudhuri was elected as a political speaker for the Calcutta branch of the All India Radio.

Writing was Nirad C Chaudhuri's innate passion and he pursued this until the very end. His last work was published at the age of 99. Nirad will always be remembered for his phenomenal biography 'The Autobiography of an Unknown Indian' published in the year 1951. It put him directly on the short list of great Indian English writers of those days. The book traces the height of the British Raj in India till its eventual dissolution. He died at Oxford in England two months short of his 102nd birthday in the year 1999.