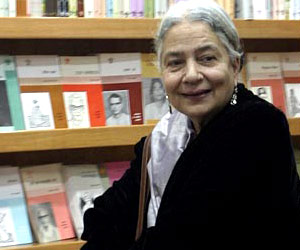 Born: June 24, 1937
Achievement: Won the Winifred Holtby Memorial Prize for her novel "Fire on the Mountain" and her children's book "The Village by the Sea" (1982), won the Guardian Children's Fiction Award.

Anita Desai is an Indian novelist and short story writer. She is known for her sensitive portrayal of the inner feelings of her female characters. Many of Anita Desai's novels explore tensions between family members and the alienation of middle-class women. In her later novels, Anita Desai wrote on varied themes such as German anti-Semitism, the demise of traditions, and Western stereotypical views of India.

Anita Desai was born as Anita Mazumdar on June 24, 1937 in Mussoorie. Her mother was German and her father was Bengali. Anita Desai completed her schooling from Queen Mary's Higher Secondary School in Delhi and graduated in English literature from the University of Delhi (Miranda House).

Anita Desai made her debut as novelist in 1963 with "The Peacock". It was followed by "Voices of the City" (1965)- a story about three siblings and their different ways of life in Calcutta. Her novel "Fire on the Mountain" (1977) won the Winifred Holtby Memorial Prize. Anita Desai's other works include "Clear Light of Day" (1980), "In Custody" (1984) and "Fasting, Feasting" (1999), each of which was shortlisted for the Booker Prize. "In Custody" was made into a film by Merchant Ivory productions. Her children's book "The Village by the Sea" (1982), won the Guardian Children's Fiction Award. Anita Desai's most recent novel is "The Zig Zag Way" (2004), set in 20th century Mexico.

Anita Desai is a Fellow of the Royal Society of Literature, the American Academy of Arts and Letters, Girton College, Cambridge and Clare Hall, Cambridge. Presently, Anita lives in the United States, where she is the John E. Burchard Professor of Writing at Massachusetts Institute of Technology, Cambridge, MA.