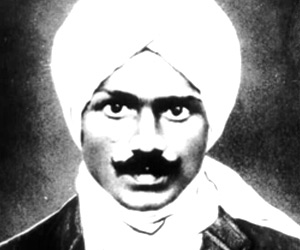 Born - 11 December 1882
Died - 11 September 1921
Achievements - Subramanya Bharathi was a Tamil poet, reformer and freedom fighter during the pre-independence era. His used the adeptness at poetry to the best of his ability to coax the masses in the south to join the great Indian struggle for independence. Bharathi's name is counted amongst the most celebrated bards of the country.

Subramanya Bharathi was a Tamil poet, reformer and freedom fighter during the pre-independence era. Also referred to by the name of Mahakavi Bharathiyar meaning Great Poet of Tamil, Bharathi's name is counted amongst the most celebrated bards of the country. He was an expert at both prose and poetry and used these to the best of his ability to coax the masses in the south to join the great Indian struggle for independence. His time was the most eventful one in the history of India and his contemporaries included the likes of Mahatma Gandhi, Bal Gangadhar Tilak, Sri Aurobindo and V.V.S. Aiyar.

Read on to know more about Subramanya Bharathi, who got attracted to the Hindu spirituality and nationalism during his stay at Varanasi. He attended the meeting of the All India National Congress in the year 1905 here and on his return also got the opportunity to meet Sister Nivedita, the spiritual daughter of the great Indian philosopher and thinker, Swami Vivekananda. Subramanya Bharathi felt very impressed on meeting Sister Nivedita. This phase proved to be a crucial turning point in the life history of Subramanya Bharathi.

He now began to take active interest in the affairs of the outside. As such, Subramanya Bharathi entered the sphere of journalism by joining as assistant editor of a Tamil daily 'Swadeshamitran' in 1904. In the coming time, he became the editor of a Tamil weekly 'India' and another English newspaper 'Bala Bharatham' in 1907. These newspapers not only helped to awaken the feeling of nationalism among the masses and inform about the daily affairs of the outside world, but also served to bring out the creativity of Bharathi.

Bharathi began to publish his poems regularly in these editions and the themes often delved from complex religious hymns to rousing nationalist sentiments to songs on the Russian and French revolutions. He was simultaneously against social poverty, exploitation and abuse of the downtrodden people and the British ruling over the country. Though he lived a life of utter poverty, he was always positive in his thoughts and action.