Here is given the biography of the renowned writer Shobha De. Check out the life history & works of Shobha Dey.
Home : Famous Indians : Writers : Shobha De 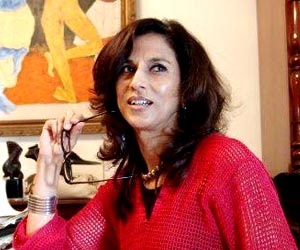 Shobha De is an eminent Indian novelist, who is often known as India's Jackie Collins. She was born as Shobha Rajadhyaksha to the Saraswat Brahmin family of Maharashtra on the January 7, 1947. She completed her graduation from St. Xavier's College, Mumbai and obtained degree in Psychology. In this article, we will present you with the biography of Shobha De, a well known Indian writer.

In the beginning of her career, she worked as a model and made a name for herself. Thereafter, she thought of changing her profession. Then, she pursued her career in Journalism. She brought out three magazines namely Stardust, Society, and Celebrity. Presently, she is working as a freelance writer for a couple of newspapers and magazines. To know the complete life history of Shobha Dey, read on.