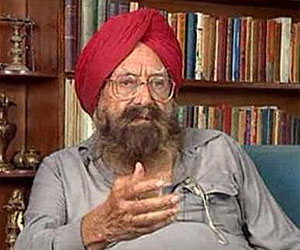 Born - 2 February 1915
Achievements - A significant post-colonial writer in the English language, Khushwant Singh is known for his clear-cut secularism, wit and a deep passion for poetry. A regular contributor to various national dailies, Singh is also famous for his novel 'Train to Pakistan penned in the year 1956.

Infact, Khuswant Singh's writing is so popular that his weekly newspaper column, "With Malice towards One and All", published in many Indian national dailies is among the most widely-read commentaries in the country. Singh completed his bachelor's from the Government College at Lahore and thereafter, pursued further studies in law at King's College in London, UK. Sir Sobha Singh, Khushwant Singh's father, then used to work at a reputed builder in Lutyens' Delhi. Read on about life history of Khuswant Singh.

Once while still practicing as a lawyer in the High Court of Lahore, Khushwant Singh was on his way to his family's summer residence at Kasauli at the foothills of the Himalayas. It was just days prior to the partition of India and Pakistan in August 1947. Singh was driving his car when he came across a jeep full of Sikhs on an unusually vacant road that day. The Sikh men pridefully narrated to him how they had just butchered away all residents of a Muslim village.

All these instances found vivid description in the book 'Train to Pakistan' Khushwant Singh later wrote in 1956. In the time to come, Singh was appointed to edit Yojana, a journal published by the Indian government. Other publications whose editing Singh was encharged with were the Illustrated Weekly of India, a newsweekly and two other major Indian dailies - The National Herald and the Hindustan Times. Under his leadership, The Illustrated Weekly came to be hailed as India's pre-eminent newsweekly.

There's many other kudos bagged by Khushwant Singh. For instance, Singh was a Rajya Sabha member of the Indian parliament from 1980 to 1986. He was also honored with the Padma Bhushan award in the year 1974 for service to his country, but he returned the award in protest against the siege of the Golden Temple by the Indian Army in 1984. Undeterred, the Indian government awarded Singh an even more prestigious honor, the Padma Vibhushan in the year 2007.