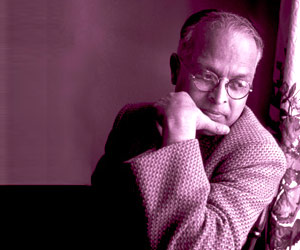 R.K. Narayan is one of the most famous and widely read Indian novelists. His stories were grounded in a compassionate humanism and celebrated the humour and energy of ordinary life.

R.K. Narayan was born on October 10, 1906 in Madras. His father was a provincial head master. R.K. Narayan spent his early childhood with his maternal grandmother, Parvathi in Madras and used to spend only a few weeks each summer visiting his parents and siblings. R.K. Narayan studied for eight years at Lutheran Mission School close to his grandmother's house in Madras, also for a short time at the CRC High School. When his father was appointed headmaster of the Maharaja's High School in Mysore, R.K. Narayan moved back in with his parents. He obtained his bachelor's degree from the University of Mysore.

R.K. Narayan began his writing career with Swami and Friends in 1935. Most of his work including Swami and friends is set in the fictional town of Malgudi which captures everything Indian while having a unique identity of its own. R.K. Narayan's writing style was marked by simplicity and subtle humour. He told stories of ordinary people trying to live their simple lives in a changing world.

R.K. Narayan won numerous awards and honors for his works. These include: Sahitya Akademi Award for The Guide in 1958; Padma Bhushan in 1964; and AC Benson Medal by the Royal Society of Literature in 1980; R.K. Narayan was elected an honorary member of the American Academy and Institute of Arts and Letters in 1982. He was nominated to the Rajya Sabha in 1989. Besides, he was also conferred honorary doctorates by the University of Mysore, Delhi University and the University of Leeds.