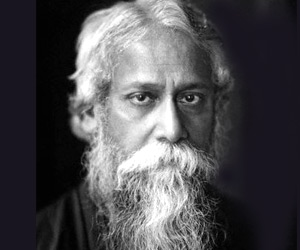 Born: May 7, 1861
Died: August 7, 1941
Achievements: Rabindranath Tagore became the first Asian to became Nobel laureate when he won Nobel Prize for his collection of poems, Gitanjali, in 1913; awarded knighthood by the British King George V; established Viswabharati University; two songs from his Rabindrasangit canon are now the national anthems of India and Bangladesh

Rabindranath Tagore was an icon of Indian culture. He was a poet, philosopher, musician, writer, and educationist. Rabindranath Tagore became the first Asian to became Nobel laureate when he won Nobel Prize for his collection of poems, Gitanjali, in 1913. He was popularly called as Gurudev and his songs were popularly known as Rabindrasangeet. Two songs from his Rabindrasangit canon are now the national anthems of India and Bangladesh: the Jana Gana Mana and the Amar Shonar Bangla.

Rabindranath Tagore was born on May 7, 1861 in a wealthy Brahmin family in Calcutta. He was the ninth son of Debendranath and Sarada Devi. His grandfather Dwarkanath Tagore was a rich landlord and social reformer. Rabindra Nath Tagore had his initial education in Oriental Seminary School. But he did not like the conventional education and started studying at home under several teachers. After undergoing his upanayan (coming-of-age) rite at the age of eleven, Tagore and his father left Calcutta in 1873 to tour India for several months, visiting his father's Santiniketan estate and Amritsar before reaching the Himalayan hill station of Dalhousie. There, Tagore read biographies, studied history, astronomy, modern science, and Sanskrit, and examined the classical poetry of Kalidasa.

In 1874, Tagore's poem Abhilaash (Desire) was published anonymously in a magazine called Tattobodhini. Tagore's mother Sarada Devi expired in 1875. Rabindranath's first book of poems, Kabi Kahini ( tale of a poet ) was published in 1878. In the same year Tagore sailed to England with his elder brother Satyandranath to study law. But he returned to India in 1880 and started his career as poet and writer. In 1883, Rabindranath Tagore married Mrinalini Devi Raichaudhuri, with whom he had two sons and three daughters.

In 1884, Tagore wrote a collection of poems Kori-o-Kamal (Sharp and Flats). He also wrote dramas - Raja-o-Rani ( King and Queen) and Visarjan (Sacrifice). In 1890, Rabindranath Tagore moved to Shilaidaha (now in Bangladesh) to look after the family estate. Between 1893 and 1900 Tagore wrote seven volumes of poetry, which included Sonar Tari (The Golden Boat) and Khanika. In 1901, Rabindranath Tagore became the editor of the magazine Bangadarshan. He Established Bolpur Bramhacharyaashram at Shantiniketan, a school based on the pattern of old Indian Ashrama. In 1902, his wife Mrinalini died. Tagore composed Smaran ( In Memoriam ), a collection of poems, dedicated to his wife.

In 1905, Lord Curzon decided to divide Bengal into two parts. Rabindranath Tagore strongly protested against this decision. Tagore wrote a number of national songs and attended protest meetings. He introduced the Rakhibandhan ceremony , symbolizing the underlying unity of undivided Bengal.

In 1909, Rabindranath Tagore started writing Gitanjali. In 1912, Tagore went to Europe for the second time. On the journey to London he translated some of his poems/songs from Gitanjali to English. He met William Rothenstein, a noted British painter, in London. Rothenstien was impressed by the poems, made copies and gave to Yeats and other English poets. Yeats was enthralled. He later wrote the introduction to Gitanjali when it was published in September 1912 in a limited edition by the India Society in London. Rabindranath Tagore was awarded Nobel Prize for Literature in 1913 for Gitanjali. In 1915 he was knighted by the British King George V.

In 1919, following the Jallianwala Bagh massacre, Tagore renounced his knighthood. He was a supporter of Gandhiji but he stayed out of politics. He was opposed to nationalism and militarism as a matter of principle, and instead promoted spiritual values and the creation of a new world culture founded in multi-culturalism, diversity and tolerance. Unable to gain ideological support to his views, he retired into relative solitude. Between the years 1916 and 1934 he traveled widely.

1n 1921, Rabindranath Tagore established Viswabharati University. He gave all his money from Nobel Prize and royalty money from his books to this University. Tagore was not only a creative genius, he was quite knowledgeable of Western culture, especially Western poetry and science too. Tagore had a good grasp of modern - post-Newtonian - physics, and was well able to hold his own in a debate with Einstein in 1930 on the newly emerging principles of quantum mechanics and chaos. His meetings and tape recorded conversations with his contemporaries such Albert Einstein and H.G. Wells, epitomize his brilliance.