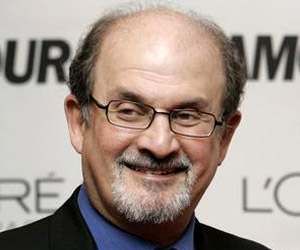 Salman Rushdie is one of the most famous Indian origin authors. He is best known for the violent backlash his book The Satanic Verses (1988) provoked in the Muslim community. Iranian spiritual leader Ayatollah Khomenei issued a fatwa against Salman Rushdie, calling for his assassination, forcing Rushdie to go underground.

Salman Rushdie began his writing career began with Grimus, which was published in 1975. He gained literary fame with his second novel "Midnight's Children." The book was awarded the 'Booker of Bookers' prize in 1993 after being selected as the best novel to be awarded the Booker Prize in its first 25 years. The novel narrates key events in the history of India through fiction. His third novel "Shame", depicted the political turmoil in Pakistan with characters based on Zulfikar Ali Bhutto and General Muhammad Zia-ul-Haq. Salman Rushdie's latest novel was Shalimar The Clown. The novel was shortlisted for the 2005 Whitbread Novel Award.

Salman Rushdie has won many awards and honors. These include: Booker Prize for Fiction, James Tait Black Memorial Prize (Fiction), Arts Council Writers' Award, "Booker of Bookers" or the best novel among the Booker Prize winners for Fiction, and Writers' Guild Award.