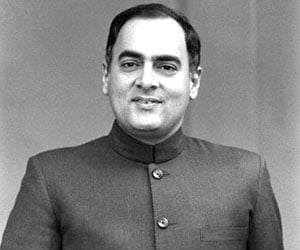 Born: August 20, 1944
Martyrdom: May 21, 1991
Achievements: Became Prime Minister of India at the age of 40. Led Congress to its greatest victory in the Lok Sabha elections, winning about 80 per cent of seats. Played a key role in the introduction of computers in India.

Rajiv Gandhi was the youngest Prime Minister of India. He became Prime Minister at the age of 40. Rajiv Gandhi came from a family that had great political lineage. He was the eldest son of Indira and Feroze Gandhi. Her mother Indira Gandhi and grandfather Jawaharlal Nehru were Prime Ministers of India. As a Prime Minister Rajiv Gandhi made a valuable contribution in modernizing Indian administration. He had the vision and foresight to see that information technology will play a key role in the 21 century and worked actively to develop India's capacity in this realm.

Rajiv Gandhi was born on August 20, 1944 in Bombay (Mumbai) in India's most famous political family. His grandfather Jawaharlal Nehru played a stellar role in India's freedom struggle and became independent India's first Prime Minister. His parents lived separately and Rajiv Gandhi was raised at his grandfather's home where her mother lived. Rajeev Gandhi did his schooling from the elite Doon school and then studied at the University of London and at Trinity College, Cambridge in Britain. At Cambridge, Rajiv Ghandi met and fell in love with an Italian student Sonia Maino and they got married in 1969.

Returning to India, Rajeev Ghandi became a commercial airline pilot. His younger brother Sanjay Gandhi entered politics and became a trusted lieutenant of her mother Indira Gandhi. After Sanjay's death in a plane crash in 1980, Rajiv reluctantly entered politics at the instance of his mother. He won his first Lok Sabha election in 1981 from Amethi-the erstwhile constituency of his brother. Soon he became the General Secretary of the Congress Party. After the assassination of Indira Gandhi in October 1984 he became the Prime Minister of India at the age of 40. He called for general elections in 1984 and riding on a massive sympathy wave led Congress to a thumping victory. Congress garnered 80 percent of the seats in the lower house and achieved its greatest victory since independence.

In his initial days as Prime Minister, Rajiv Gandhi was immensely popular. During his tenure as Prime Minister of India, he brought a certain dynamism to the premiership, which had always been occupied by older people. He is credited with promoting the introduction of computers in India. Prime Minister Rajiv Gandhi began leading in a direction significantly different from Indira Gandhi's socialism. He improved bilateral relations with the United States and expanded economic and scientific cooperation. He increased government support for science and technology and associated industries, and reduced import quotas, taxes and tariffs on technology-based industries, especially computers, airlines, defence and telecommunications. He worked towards reducing the red tape in the governance and freeing administration from bureaucratic tangles. In 1986, Rajiv Gandhi announced a national education policy to modernize and expand higher education programs across India.

Rajiv Gandhi authorised an extensive police and army campaign against the militants in Punjab. Rajiv's government suffered a major setback when its efforts to broker peace between the Government of Sri Lanka and the LTTE rebels backfired. As per the peace accords signed in 1987, the LTTE would disarm to the Indian Peace Keeping Force which was sent to Sri Lanka. But distrust and a few incidents of conflict broke out into open fighting between the LTTE militants and Indian soldiers. Over a thousand Indian soldiers were killed, and at last Rajiv Gandhi had to pull out Indian forces from Sri Lanka. It was a failure of Rajiv's diplomacy.

Although Rajeev Gandhi promised to end corruption, he and his party were themselves implicated in corruption scandals. The major scandal being Bofors Gun scandal involving alleged payoffs by the Swedish Bofors arms company. The scandal rapidly eroded his popularity and he lost the next general elections held in 1989. A coalition comprising government came to the power but it could not last its full term and general elections were called in 1991. While campaigning for elections in Sriperumbudur, Tamil Nadu, Rajiv Gandhi was assassinated on May 21, 1991 by a suicide bomber belonging to LTTE.