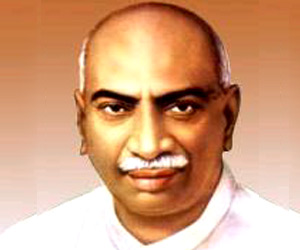 Born - 15 July 1903
Died - 2 October 1975
Achievements - K. Kamaraj played a crucial role in the appointment of India's two Prime Ministers - Lal Bahadur Shastri in the year 1964 and Indira Gandhi in the year 1966. All throughout his reign as chief minister of Tamil Nadu, K. Kamaraj strived to provide free meals and education to people. This was for the first time in the world that a measure like this was being executed in 1957.

Kumaraswami Kamaraj, who is better remembered as K. Kamaraj, was a powerful Indian politician. He was regarded as the 'kingmaker' in Indian politics and was widely respected for his traits of honesty, integrity and simplicity. During the struggle for India's independence from the British rule, Kamaraj was a close friend of Pundit Jawaharlal Nehru, who was later appointed as the first prime minister of the country. Read this biography further to learn more about K. Kamaraj.

Kamaraj was called kingmaker because he played a crucial role in the appointment of India's two Prime Ministers - Lal Bahadur Shastri in the year 1964 and again Indira Gandhi in the year 1966. Thus, people fondly called him the Gandhi of South India or even the Black Gandhi. In his hometown Tamil Nadu, the denizens still credit him for spreading education facility to the thousands under the poverty line.

All throughout the reign of K. Kamaraj in Tamil Nadu, he strived to provide free meals and education to people. And this was for the first time in the world that a measure like this was being executed by K. Kamaraj in 1957. Due to his selfless service for the good of the poor and the downtrodden in the society, the Government of India awarded him with the Bharat Ratna, posthumously in the year 1976.

Though K. Kamaraj's nurtured an interest in politics since childhood, it was at the age of 16 that he joined the Indian National Congress as a full time worker. His task was to invite speakers, make arrangements for meetings and collect funds for the Congress party. In the year 1930, Kamaraj also participated in a rally to Vedaranyam spearheaded by C. Rajagopalachari as a part of the salt Satyagraha. There were many occasions when Kumaraswami Kamaraj was put behind the bars during the struggle for India's independence.