Amongst the earliest names in Indian independence struggle is that of Mangal Pandey. Know about his life history in this biography.
Home : Famous Indians : Leaders : Mangal Pandey 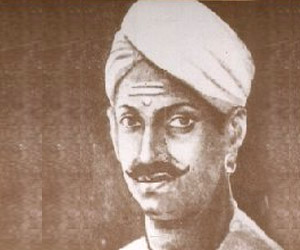 Born: 19 July 1827
Martyrdom: 8 April 1857
Achievements: A sepoy working under the British East India Company, Mangal Pandey's name got etched into the pages of the Indian history after he attacked his senior British officers in an incident, which is today remembered as the Sepoy Mutiny of 1857 or the India's First War of Independence. The reason behind this was the rumor that the cartridges used by Indian sepoys were greased with the fat of cow and pig.

Mangal Pandey, whose name is often preceded by Shaheed meaning a martyr in Hindi, was an Indian soldier during the pre-independence era. A member of the 34th Regiment of the Bengal native infantry of the East India Company, Mangal Pandey is counted among the most popular figures associated with India's freedom struggle in present times. He was born on 19 July 1827 in the Nagwa village in the Ballia district of the Uttar Pradesh state. There still exist families in this village who claim to the descendents of Mangal Pandey.

However, some disputes exist over the exact place where Mangal Pandey was born. So read on to know more about the biography of Mangal Pandey, who joined the sepoy force of the British East India Company in the year 1849 at the age of 22. His name got etched into the pages of the Indian history after he attacked his senior British officers in an incident, which is today called the Sepoy Mutiny of 1857 or the India's First War of Independence. Due to this, he was later captured and hung till death on 8 April in 1857.

Here's more about the life history of Mangal Pandey, who was a devout Hindu and practiced his religion strictly. It was rumored that the cartridge used in the Enfield P-53 rifle which was being used by the Indian sepoys was greased with the fat of pig and cow fat. These cartridges had to be bitten off in order to remove the cover prior use and this went against the religious beliefs of the Muslims and Hindus. The general opinion was that the Britishers had deliberately done this to hurt the sentiments of Indians. And this was the main reason behind the outburst of Pandey's anger.