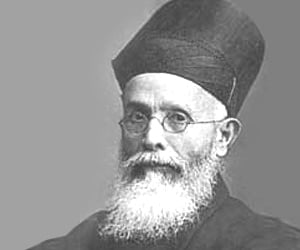 Dadabhai Naoroji is fondly called as the "Grand Old Man of India". He is viewed as the architect who laid the foundation of the Indian freedom struggle.

Dadabhai Naoroji entered the political fray in 1852. He strongly opposed the renewal of lease to the East India Company in 1853. He sent petitions to the English government in this regard. But the British government ignored his pleas and renewed the lease. Dadabhai Naoroji felt that the British misrule of India was because of ignorance of the Indian people. He set up the Gyan Prasarak Mandali (Society for Promotion of Knowledge) for the education of adult menfolk. He wrote several petitions to Governors and Viceroys regarding India's problems. Ultimately, he felt that the British people and the British Parliament must be made aware of India's plight. In 1855, at the age of 30 he sailed for England.

In England, Dadabhai Naoroji joined several learned societies, delivered many speeches and wrote articles on the plight of India. He founded the East Indian Association on December 1st, 1866. The association was comprised of high-ranking officers from India and people who had access to Members of the British Parliament. Dadabhai Naoroji was elected to the British Parliament in 1892 from Central Finsbury as the Liberal party candidate. He got a resolution passed in British Parliament for holding preliminary examinations for the I.C.S. in India and England simultaneously. He also got the Wiley Commission, the royal commission on India expenditure, to acknowledge the need for even distribution of administrative and military expenditure between India and England.

Dadabhai Naoroji was instrumental in the establishment of the Indian National Congress founded by A.O. Hume in 1885. Thrice he was elected to the post of the President of the Indian National Congress, in 1886, 1893 and in 1906. During his third term, he prevented a split between moderates and extremists in the party. The Congress' demand for swaraj (self-rule) was first expressed publicly by him in his presidential address in 1906. Dadabhai Naoroji believed in non-violent and constitutional methods of protest. He died at the age of 92 on June 30, 1917.