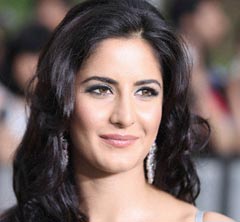 Mini Biography
Katrina Kaif is one of eight siblings, all girls, from a mother who is a Caucasian of British nationality and an N R I father. Katrina grew up in Hawai and was brought up in London. She started her modeling career at the tender age of fourteen, when Katrina Kaif was approached for a jewelry advertisement. Since then Katrina did various modeling assignment in London. She got her break in the Bollywood movie "Boom" offered by the famous film maker Kaizad Gustad. The film was not successful at the box office but Katrina Kaif was flooded with modeling assignments because of her innocent expressive face and drop-dead gorgeous looks.

Katrina has walked the ramp for several top designers. Besides walking the ramp she has also been the stunning face of Estelle jewelry, Lakme, Pantene, Veet, Kodak cameras, L'Oreal, Samsung, LG etc. Katreena is not fluent in Hindi so her voice in Hindi movies is dubbed by a native speaker of film's language but in the movie "Namastay London" she dubbed her lines on her own. Her recent films "Partner" with Salman Khan and Govinda and "Apne" with Sunny Deol and Bobby Deol were successful at box office. She has also done two Telugu movies "Malliswari" and "Allari Pidugu" and a Malayalam film "Balram vs. Taradas". Katrina has learnt Kathak dance recently.