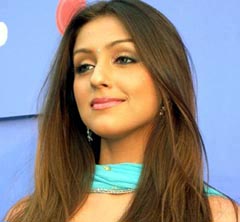 Mini Biography
Aarti Chhabria was born in a Sindhi speaking Chabria family. She is fluent in English, Hindi, Marathi, Sindhi and Gujarati languages. Arti Chabria shot into fame when she won Miss India Worldwide in 1999. But Aarti became famous in the glamour world through "Liril" advertisement and "Nasha Hi Nasha" video and thereafter there has been no looking back for her. She appeared in many advertisements before pursuing her childhood dream of acting Amul, Freshna and Krack cream were some of her popular ads. Chabria made her debut in Bollywood with "Tumse Achcha Kaun Hai". Though the film was not successful but her performance was noticed. Since then Arti has acted in many films such as "Shadi No.1", "Ssukh", "Aham Premasmi", "Lajja " etc. but she is still struggling to set her feet firm in Bollywood. Aarti won critical acclaim for her performance in the film "Lajja" but it failed at box office. She has also acted in a few Telugu and Kannada movies. The talented actress has stolen the hearts of cinegoers with her charming beauty.