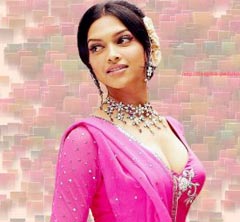 Mini Biography
Deepika Padukone was born at Copenhagen (Denmark) to famous Indian Badminton player Prakash Padukone and Ujjala Padukon. She did her schooling from Sophia's High School, Bangalore and completed her undergraduate program from Mount Carmel College. Dipika Padukone was a state level Badminton player but she did not take her game to the national level as she had set her sights on the glamorous world of showbiz. Deepika was a proud member of dance club run by his father. She has appeared in advertisements of Liril soap, Dabur Lal powder, plus shampoo and Limca. Deepika Padukon has received many prestigious modeling offers including brand ambassadorship of the Jewels of India, an annual jewellery festival. Deepika Padukone entered the international modeling arena with her first campaign with Maybelline, one of the most renowned cosmetic brands.

Deepika also featured as one of the models for the Kingfisher swimsuit calendar for the year 2006. Dipika did a music video for 'Naam Hai Tera' a song from the pop album Aap Ka Suroor, an independent album by singer Himesh Reshammiya. Deepika Padukone made her film debut with the Kannad film "Aishwarya". She won appreciation for her performance in her debut movie. Deepika made her Bollywood debut with "Om Shanti Om" opposite Shah Rukh Khan. In the movie, she has been depicted as a 1970s superstar Shantipriya and later as Sandhya.