Know about Babita's profile and her film background by going through her biography.
Bollywood : Indian Film Actresses : Babita 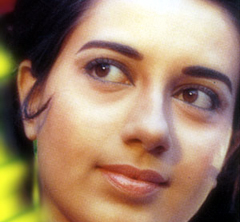 Mini Biography
Babita was born as Bhambhani to actor Hari Shivdashani in a traditional Sindhi family. She is now better known as the mother of Bollywood stars Karishma Kapoor and Karina Kapoor. Babita is niece of erstwhile actress Sadhana. G P Sippy gave her breakthrough in his film "Dus lakh" but her first released film was "Raj" with another debutant Rajesh Khanna. In her short career Babita did nineteen films including the hit film "Kal Aaj Aur Kal" with Randhir Kapoor.

Later, Babita got married to Randhir kapoor and she became daughter-in-law of the famous Kapoor's family. She had to leave acting in films as daughters and daughters-in law of kapoor family were not allowed to act in films. However, Karishma and Kareena broke the tradition of Kapoor family with full support from her mother Babita. Her daughter Kareena is a leading star in the film Industry. In March 2005, Babita became grandmother, when Karishma gave birth to a baby girl. Now Babita lives with her younger daughter Kareena Kapoor.