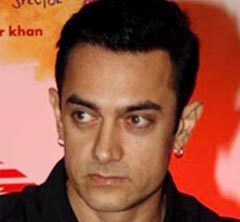 Mini Biography
Amir Hussain Khan (Aamir Khan) is a highly acclaimed film actor, producer and director. He began his career in Bollywood as child actor in the movie "Yaadon Ki Baaraat". Eleven years later he appeared as supporting actor in the film "Holi". Amir Khan debuted as leading actor with "Qayamat Se Qayamat Tak" and won the Filmfare Best Male Debutant Award for his performance in the film. After that he appeared in a number of movies but most of them were unsuccessful at box office. However, he got success with the film "Dil". Thereafter "Jo Jeeta Wohi Sikander" and 'Rangeela" followed and both the films did well at the box office.

Aamir Khan also co-wrote the screenplay for Mahesh Bhatt's film "Hum Hain Rahi Pyaar Ke", and also acted in the same. Amir Khan won his first Filmfare Best Actor Award for his performance in the film "Raja Hindustani". This was followed by semi hit films such as "Ishq", "Ghulam" and "Sarfarosh". Aamir Khan won his second Filmfare Best Actor Award for his performance in the "Academy Nominated" movie "Lagaan". He also earned nomination for best actor in the Filmfare Award ceremony for his acting in the film "Dil Chahta Hai". After giving several commercially successful movies and delivering highly acclaimed performances, he is now one of the top and most successful leading actors of Hindi cinema. Recently, Aamir directed "Taare Zameen Par" and won the Filmfare Best Director Award.