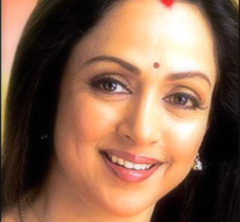 Mini Biography
Hema Malini was born in a chakaravarthy family at Ammankudi in Tamilnadu. Her mother Jaya was a Tamil film producer. Hema Malini is a trained classical dancer and she has performed at a number of dance shows and concerts. Hema made her debut in Bollywood with the film "Sapno Ka Saudagar" opposite Raj Kapoor. Her next movie was "Johny Mera Naam" opposite Dev Anand. The movie "Johny Mera Naam" was super hit at box office and Hema became a top star. Hema Malini again worked with Deva Anand in the film "Tere Mere Sapne". Hema Malini played double role with Dharmendra and Sanjeev Kumar in the movie "Seeta Aur Geeta" which was also a successful film at box office. With these hit films she became one of the ruling divas in the Bollywood and her fans called her 'Dream Girl' of the Bollywood.

Though Hema had starred many hit movies in 70's and 80's but she is best remembered for her role in "Sholay" as talkative Tangewali. She had taken backseat from films for a few years and Hema joined politics, she is now a member of Rajya Sabha. Hema Malini had turned down marriage proposal from Jeetendra and Sanjeev Kumar before marrying her co-star Dharmendra. She has two daughters Esha and Aahan. Esha Deol is film actress and Aahan is set to enter Bollywood as film director. Besides acting in the films she had tried her hand at directing and made the film "Dil Ashna Hai" with Sharukh Khan and late Divya Bharti. Hema also directed and starred in the TV serial Noopur, in which she was depicted as a Bharatanatyam dancer going to America.