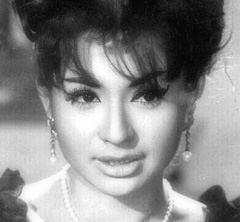 Mini Biography
Helen Richardson Khan was born to an Anglo Indian father and Burmese mother. She started her career as chorus dancer in the films "Shabistan "and "Awaara". Since then Helen regularly featured in the films as item dancer. Her first film as solo dancer was "Alif Laila". Helen gave her first hit film with her performance in the song "Mera Naam Chin Chin Chu" in O.P. Nayyar's hit film "Howrah Bridge". After this she was in great demand for cabaret dance and vamp roles in the films. But in 70's she found herself in challenging situation when young actresses started doing vamp roles and sexy cabaret dances. Helen faced financial difficulties in those days. Then writer Salim Khan came to her rescue.

Salim Khan helped her to get good roles in the films in which he was co-scripting with Javed Akhtar such as "Don", "Imaan" and "Dostana". Therafter Helen did "Lahu Ke Do Rang" directed by Mahesh Bhatt and she went on to win Filmfare Best Supporting actress Award for her performance in this film. Soon afterwards, she married Salim Khan, as his second wife. Helen and Salim have an adopted daughter named Arpita. Helen had retired from the screen for a number of years but recently she appeared in the films "Mohabbatein" as head of girl's school and in "Hum Dil De Chuke Sanam" as mother of Salman Kkan.