Best Time for a Camel Safari : October/November to March

Anyone coming to the Indian subcontinent on an adventure holiday must make a stoppage at Rajasthan to go on a camel safari. It is one of the best ways to explore the magnificent desert and can take you on routes ranging from short, easy ones to long, rigorous ones. Camel safaris in India mainly revolve around the cities of Jaisalmer, Jodhpur and Bikaner. The erstwhile kingdoms of Maharajas, these cities boast of the regal charm even today. The other cities that may be covered on an Indian camel safari tour include Shekhawati, Pushkar and Nagaur.

Throughout the safari, the camel will be your constant companion, taking you through the burning sand in the day and the bone-chilling milieu in the night. Booking a camel safari in India is the perfect way to explore the rich architectural heritage of the royal state of Rajasthan. The safari lets you explore the entire Thar Desert and serves as a window to the rich culture, heritage and life styles of the Rajasthani people. The day is consumed by visits to the various monuments, like forts, places, havelis, etc. While, the night is spent either in camps or in the numerous heritage hotels in which the state abounds. 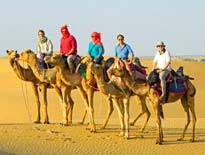 Adding to the pleasure are the performances by the local folk artists. A typical Indian camel safari will bring you across the architectural ruins of Lodurva and Sam sand dunes, along with the water source of Moolsagar. Another popular route for camel safari in India is through the Shekhawati region, passing through towns of Ramgarh, Nawalgarh, Dundlod, Mandawa and Churu. However, these safaris last for around 11 days. You can also take one-day or two-days camel safari, covering only the major destinations. The period of October to March is for special camel safaris to Pushkar and Nagaur.