Indian lion safari is one of the most popular tourist attractions of the country. The thrill of watching the wild beast in its natural habitat is an experience that is sure to remain etched in your memory for a long time to come. The sight of the 'King of the Jungle' roaming around in the wild is worth the effort you put in for going on a lion safari in India. You can virtually feel the power that the majestic animal exudes. The hub of lion safaris in India is the Gir National Park, the last abode of the Asiatic lion in the whole world.

Asiatic lion, found in India, is a little smaller than the African one, but equally magnificent. The mane is less developed, elbow tufts thicker and tail tuft longer than those of its African counterpart. Lion Safari in India is organized either in jeeps or on the back of elephants. Riding on top of an elephant gives the advantage of height, plus the benefit of taking in even the minutest detail, since the pace of an elephant is very slow. A jeep safari takes you on a tour of the park at a much faster pace and is the perfect for those who have limited amount of time in their hands. 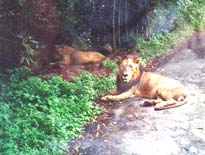 Gir National Park of Gujarat is the one and the only place in the world where you can watch the Asiatic lion in its natural habitat. Spread over an area of approximately 1412 sq km, the park is the best visited in the months of mid-October to mid-June.

Nehru Zoological Park
Nehru Zoological Park, located in Hyderabad, has a significant population of Asiatic as well as African lions. There is a separate Lion safari park also, where one can watch these magnificent animals lazing around in a near-natural habitat. If lucky, you may also spot a white tiger roaming around the park.