Python snake, also known as Ajgar, is one of the most massively built snakes of the Indian subcontinent. It belongs to the Boidae Family and is dependent on water to quite an extent. One of the unique features of the Rock pythons of India is that they can raise their body temperature above the ambient level, through muscular contractions.

Physical Traits
Python snake grows to an average length of somewhere around 4 m, with the longest python measuring 5.85 m. Its weight varies from 70 to 129 pounds. The entire body is covered with scales, which are usually smooth and glossy. The head is flat, with small eyes and large nostrils. On either side of the anal vent are vestigial or rudimentary limbs, known as spurs. An adult python is white or yellow in color, depending upon its habitat. The pythons of the hill forests of Western Ghats and Assam are darker in color, while those of the Deccan Plateau and East Coast are lighter. Sensory pits on the rostral (snout shield) and first two labials distinguish a Rock python from other types of snakes. 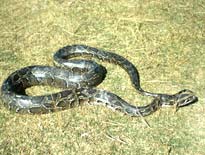 Rock python of India is a lethargic creature, moving only while hunting a prey or when threatened. It shows great swimming ability and is quite at ease in water.

Diet
The diet of Pythons consists of mammals, birds and reptiles. After eating a huge meal, they may go without food for many days. There is also an incidence of an Indian python not eating for 2 years at a stretch.

Natural Habitat
Python snakes can be found in dense as well as open Indian forests, mostly estuarine mangrove forest, arid scrub jungle and rain forest. They may live in abandoned mammal burrows, hollow trees, dense water reeds and mangrove thickets. However, pythons prefer to live near a permanent source of water, like rivers and lakes.

Status and Threats
Rock python of India is an endangered species, now partly protected by the Tamil Nadu Government. The reason for this is that it is killed for its fine skin, meat and even for medicinal purposes.