Cobra, scientifically known as Naja naja, is one of the poisonous snake species native to the Indian subcontinent. It grows to an average height of 1 m and has two circular ocelli patterns on the rear of its hood. These patterns seem to be connected by a curved line, giving the look of spectacles. This is why the snake is also known as the Spectacled Cobra of India. A newborn cobra measures between 20 to 30 cm, but has fully functional venom glands.

Mating Behavior
Cobra snake lays its eggs during the period of April to July. The eggs, numbering between 12 and 30 eggs, are laid underground. The incubation period lasts for 48 to 69 days.

Diet
Spectacled Cobra of India survives on a diet consisting mainly of rodents. 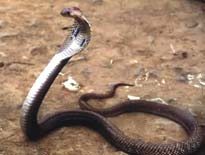 Cobra is usually found inhabiting open forests and farmlands of India. However, one may also see them in Indian cities, living in the sewers and underground drains.

Relation with Indian Mythology
Cobra snake is widely associated with Indian Hindu mythology. Lord Shiva is often portrayed with a protective cobra coiled around his neck. Lord Vishnu is usually represented as resting on the coiled body of Sheshnag, a snake deity with a number of cobra heads.