Indian Russell's Viper is known by a number of other names, like Daboia, Tic Polonga, etc. A highly poisonous snake of the Viperidae family, it is scientifically known as Vipera russelli. Russell's viper is responsible for most of the snakebite deaths within its habitat. It is light brown in color and is covered with three rows of dark brown or black splotches, bordered with white or yellow.

Physical Characteristics
Russell's Viper grows to a length of 1 to 1.5 m. Its head is long and triangular, with large, prominent nostrils on each side of the snout. The fangs of the snake are large, while its tail is quite small. The length of the snout-vent is 1025 to 1080 mm, while that of the tail is 212 to 225 mm. The color of the Russells Viper of India may be dark brown, brownish-yellow or brownish-gray, with black or brown oval spots edged with black/white. The young vipers are clear orange to brownish-orange in color. There are rows of oval spots along both the sides of the body and the tail is striped. 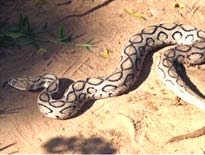 The belly of Russels Viper is pinkish-brown or whitish in color with black spots, which start becoming darker towards the tail. The top portion of the head has three separate semi triangular spots, which form a triangle with the vertex between the eyes. There is also a dark band running diagonally from the eye to the corner of the mouth. The dorsum is light yellowish brown to sandy brown in color and has chestnut blotches. At the base of the head is a pair of dark spots and the snout is adorned with a light V-shaped canthal mark.

Characteristics
Russell's Viper is responsible for the more deaths due to snakebite than any other venomous snake. It is highly irritable and when threatened, coils tightly, hisses, and strikes with a lightning speed. Its hemotoxic venom is a very potent coagulant, which damages tissue as well as blood cells.

Natural Habitat
The habitat of the Russels Viper stretches from Indian farmlands to dense rain forests. It is usually found near human settlements.