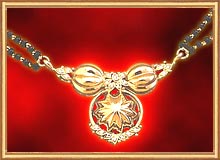 A very integral part of the Indian weddings, particularly Hindu marriages, Mangalsutra is a jewelry that symbolizes a married woman. Tying of the Mangalsutra by the groom is the most important ritual in a marriage and is known as "Mangalya Dharanam". It symbolizes an unbroken bond of understanding, love and sacrifices in their life as husband and wife. The Mangal Sutra is never taken off by the woman after marriage until the death of the husband.

Mangalsutra is basically made up of two words - Mangal which means sacred and Sutra which means a thread/cord. The Mangalsutra is known by different names in different regions of India. In south of India, it is known as Thaali, Maangalyam, etc. It is essentially a thick yellow thread in which gold "Mangalya" is strung. In some castes in south India, three knots are tied to secure the Mangal sutra during the marriage. The first knot is tied by the groom and the rest two are tied by his sisters.

It is considered that the concept of tying the Mangalsutra originated in the south and then was followed in the north as well. In the north the Mangalsutra is made of a thread in which small black beads are strung along with the "Mangalya". The black beads are supposed to protect the newly weds from evil and unfavorable influences. Else, the Mangal sutra is made of a gold string or chain with the gold Mangalya. These days, the most popular design is a long black beaded chain with a diamond pendant as the Mangalya! The Mangalsutra is still the undisputed symbol of holy matrimony and shall remain so in India.