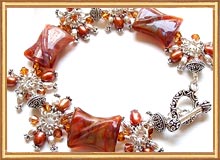 Kundan jewelry is a traditional jewelry that is exclusive to India. Available in different colors and designs, Indian Kundan jewellery is fast catching up as one of the trendiest ornaments. The gold used in making Kundan jewelry is of a very refined quality. The process by which precious stones, gems and beads are set on the gold ornament is also called Kundan by the craftsmen. Making this jewelry requires lot of skill and a fine eye for details.

Kundan jewelry is not set on solid gold. The central part of this jewelry is made of lac, which is a kind of solidified tree resin. The hollow jewelry pieces that are joined to make the Kundan jewellery are bored with holes where precious stones and gems are inserted. Since the lac is visible through the holes, very highly refined gold is poured in order to cover up those holes. The stones are then set or rather pushed into the cool but pliant gold. When the gold finally hardens, the stones get embedded in it.

Kundan jewelry has caught up with urban India recently though it was worn since ancient times. It was very much in vogue in the state of Rajasthan during the empire of the Rajputs when the rich kings used to prefer such jewelry that was inlaid with precious gems and stones. Exquisite Kundan jewelry was in high demand in the royal household and intricate carvings were the most sought after designs. Today, they have become more affordable and are considered to be one of the trendiest fashion symbols. Many young girls buy Kundan Jewelry sets for auspicious occasions since they look grand with ethnic Indian clothes.