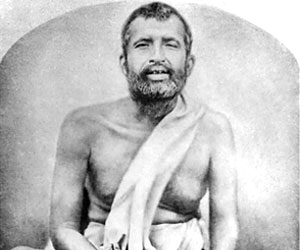 Born: February 18, 1836
Died: August 16, 1886
Achievements: Provided spiritual enlightenment to the people of Bengal and played a key role in the social reform movement in Bengal in 19th century

Ramakrishna Paramhansa was one of the foremost Hindu spiritual leaders of the country. His teachings are still deeply revered by the people. He also played a key role in the social reform movement in Bengal in 19th century.

Sri Ramakrishna Paramhansa's original name was Gadadhar Chattopadhyay. He was born on February 18, 1836 in the village of Kamarpukur, in what is now the Hooghly district of West Bengal. Gadadhar Chattopadhyay's parents were Khudiram and Chandramani. Ramakrishna was born in a poor family and his parents were hardly able to make both ends meet. Ramakrishna disliked going to school, and was not interested in the pursuit of money. Ramakrishna loved nature and liked meeting monks who stopped at his village on their way to Puri.

Right from childhood Ramakrishna Paramhansa was an iconoclast. At his investiture ceremony (Upanayna) he shocked everyone when he declared that he would have his first alms as a Brahmin from a certain Sudra woman of the village. No argument or appeal was able to budge him from his position. Finally, Ramkumar, his eldest brother and the head of the family after the passing away of their father, gave in.

Ramakrishna's elder brother Ramkumar ran a Sanskrit school in Calcutta and also served as priest in some families. During this time, a rich woman of Calcutta, Rani Rashmoni, founded a temple at Dakshineswar. She approached Ramkumar to serve as priest at the temple of Kali and Ramkumar agreed. Ramakrishna decorated the deity and when Ramkumar retired, Ramakrishna took his place as priest.

When Ramakrishna started worshipping the deity Bhavatarini, he began to question if he was worshipping a piece of stone or a living Goddess. This question disturbed him day and night. He prayed to Goddess Kali to reveal Herself to him. One day he was so impatient to see Mother Kali that he decided to end his life. He seized a sword hanging on the wall and was about to strike himself with it, when he is reported to have seen light coming from the deity in waves. He is said to have been soon overwhelmed by the waves and fell unconscious on the floor. Ramakrishna prayed to Goddess Kali for more religious experiences and he is believed to have experienced number of them.

Soon he became popular and drawn by the magnetism of Sri Ramakrishna's divine personality, people flocked to him from far and near. People of all ages, caste, and religion visited him. Ramakrishna Paramhansa's small room in the Dakshineswar temple garden on the outskirts of the city of Calcutta became a veritable parliament of religions.

Ramakrishna emphasised that God-realisation is the supreme goal of all living beings. Hence, for him, religion served as a means for the achievement of this goal. Ramakrishna's mystical realization, classified by Hindu tradition as nirvikalpa samadhi (constant meditation), led him to believe that various religions are various ways to reach the Absolute, and that the Ultimate Reality could never be expressed in human terms.

Ramakrishna Paramhansa taught ceaselessly for fifteen years the basic truths of religion through parables, metaphors, songs and by his own life. He developed throat cancer and attained Mahasamadhi on August 16, 1886, leaving behind a devoted band of 16 young disciples headed by the well-known saint-philosopher and orator, Swami Vivekananda.