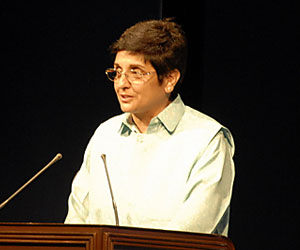 Kiran Bedi is truly an icon of heroism. She was the first Indian woman to join the Indian Police Services. She was born on June 9, 1949 at Amritsar in Punjab. She is one of the most renowned police officers, who have put in their whole hearted effort in serving the society. Well, in this article, we will present you with the biography of Kiran Bedi, who is the pride of our Indian police force.

In the recent times, she has been appointed as the Director General of India's Bureau of Police Research and Development. Earlier, she served as the Police Advisor in the United Nations peacekeeping department. For her noteworthy performance, she was awarded with the UN medal. In the year 2005, she received the honorary degree of Doctor of Law. To know the complete life history of Kiran Bedi, read on…

Education
She did her schooling from the Sacred Heart Convent School in Amritsar. She completed her graduation in the English language from the Government College for Women in Amritsar. She received her Masters degree in Political Science from Punjab University, Chandigarh. She continued her studies, even when she joined the Indian Police force. In the year 1988, she obtained a degree in Law (LLB) from Delhi University.

In the year 1993, the Department of Social Sciences, the Indian Institute of Technology in New Delhi awarded her with a Ph.D. degree. Her topic of research was Drug Abuse and Domestic Violence. Kiran Bedi has won the championship of all-India and all-Asian tennis competition. When she was 22 years old, she won the Asian Ladies Title.

Career
Her career started in the year 1970, when she took the job of a lecturer at Khalsa College for Women in Amritsar. Two years later, she joined the Indian Police Services. All the way through her career, she has taken up a number of challenging assignments. She has served as the Traffic Commissioner of New Delhi, Deputy Inspector General of Police in the insurgency prone area of Mizoram.

She has also been the Lieutenant Governor of Chandigarh and Director General of Narcotics Control Bureau. An interesting thing about Kiran Bedi is that, sometimes, she is referred to as Crane Bedi. The reason behind calling her by this name is that, she dragged the car of Prime Minister Indira Gandhi due to violation of parking rules.

Kiran Bedi made the Indian Police Service change its decision in matters related to traffic management, control over narcotics and VIP security. During her tenure as the Inspector General of Tihar Jail, she brought about several reforms in the way the prisons are managed. She brought forth a number of measures like yoga, meditation, redressal of complaints made by the prisoners etc.

Kiran Bedi laid the foundation for the establishment of two voluntary organizations, namely, Navajyoti (1988) & India Vision Foundation (1994). These organizations were primarily set up with the aim of improving the living conditions of the drug addicts and the underprivileged people. The effort of Kiran Bedi has paid and brought her worldwide recognition. Her works have always earned appreciation. For drug abuse prevention, her organization was presented with the Serge Soitiroff Memorial Award by the United Nations.

Awards
For her outstanding work, Kiran Bedi has received a number of accolades like: