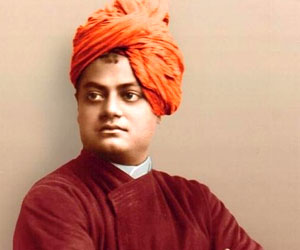 Born: January 12, 1863
Died: July 4, 1902
Achievements: Played a major role in spiritual enlightenment of Indian masses; Spread Vedanta philosophy in the West; established Ramakrishna Mission for the service of the poor.

Swami Vivekananda was one of the most influential spiritual leaders of Vedanta philosophy. He was the chief disciple of Ramakrishna Paramahansa and was the founder of Ramakrishna Math and Ramakrishna Mission. Swami Vivekananda was the living embodiment of sacrifice and dedicated his life to the country and yearned for the progress of the poor, the helpless and the downtrodden. He showed a beacon of light to a nation that had lost faith in its ability under British rule and inspired self-confidence among Indians that they are second to none. His ringing words and masterful oratory galvanized the slumbering nation.

As a child Narendra was very lively and naughty. He was good in studies as well as in games. He studied instrumental and vocal music and also practiced meditation from a very early age. Even when Narendra was young he questioned the validity of superstitious customs and discrimination based on caste and religion. As a child Narendra had great respect for sanyasis (ascetics). He would give away anything to anybody if asked for. Whenever a beggar asked for alms, he would give him anything he had. Thus from childhood Narendra had the spirit of sacrifice and renunciation.

In 1879, Narendra passed matriculation and entered Presidency College, Calcutta. After one year, he joined the Scottish Church College, Calcutta and studied philosophy. He studied western logic, western philosophy and history of European nations. As he advanced in his studies, his thinking faculty developed. Doubts regarding existence of God started to arise in Narendra's mind. This made him associate with the Brahmo Samaj, an important religious movement of the time, led by Keshab Chandra Sen. But the Samaj's congregational prayers and devotional songs could not satisfy Narendra's zeal to realise God.

During this time Narendra came to know of Sri Ramakrishna Pramahans of Dakshineswar. Sri Ramakrishna was a priest in the temple of Goddess Kali. He was not a scholar. But he was a great devotee. It was being said of him that he had realized God. Once, Narendra went to Dakshineswar to with his friends see him. He asked Ramakrishna, whether he had seen God. The instantaneous answer from Ramakrishna was, "Yes, I have seen God, just as I see you here, only in a more clear sense." Narendra was astounded and puzzled. He could feel the man's words were honest and uttered from depths of experience. He started visiting Ramakrishna frequently.

It was in Narendra's nature to test something thoroughly before he could accept it. He would not accept Ramakrishna as his guru without a test. Ramakrishna used to say that, in order to realize God, one should give up the desire for money and women. One day Narendra hid a rupee under his pillow. Sri Ramakrishna, who had gone out, came into the room and stretched himself on the cot. At once he jumped up as if bitten by a scorpion. When he shook the mattress, the rupee coin fell down. Later he came to know that it was the doing of Narendra. Narendra accepted Sri Ramakrishna as his guru and took training under him for five years in the Advaita Vedanta, the philosophy of non-dualism. Sri Ramakrishna passed away in 1886 and nominated Narendra as his successor. After his death Narendra and a core group of Ramakrishna's disciples took vows to become monks and renounce everything, and started living in a supposedly haunted house in Baranagore.

In 1890, Narendra set out on a long journey. He covered the length and breadth of the country. He visited Varanasi, Ayodhya, Agra, Vrindavan, Alwar etc. Narendra acquired the name of Swami Vivekananda during the journey. It is said that he was given the name Vivekananda by Maharaja of Khetri for his discrimination of things, good and bad. During his journey, Vivekananda stayed at king's palaces, as well as at the huts of the poor. He came in close contact with the cultures of different regions of India and various classes of people in India. Vivekananda observed the imbalance in society and tyranny in the name of caste. He realised the need for a national rejuvenation if India was to survive at all.

Swami Vivekananda reached Kanyakumari, the southernmost tip of the Indian subcontinent on December24, 1892. He swam across the sea and started meditating on a lone rock. He meditated for three days and said later that he meditated about the past, present and future of India. The rock is presently popular as Vivekananda memorial and is a major tourist destination.

In 1893, Swami Vivekananda went to America to attend the Conference of World Religions in Chicago. He earned wild applause for beginning his address with the famous words, "Sisters and brothers of America." Swamiji mesmerized everyone in America with his masterful oratory. Wherever he went, he dwelt at length on the greatness of Indian Culture. He spoke with spontaneous ease on every topic, be it History, Sociology, Philosophy or Literature. He deplored the malicious propaganda that had been unleashed by the Christian missionaries in India. Swami Vivekananda also went to England. Many people became his disciples. Most famous among them was Margaret Nivedita'. She came to India and settled here.

Swami Vivekananda returned to India in 1897 after four years of touring in the West. He started disseminating the message of spiritual development among Indians. He realized that social service was possible only through the concerted efforts on an organized mission. To achieve this objective, Swami Vivekananda started Sri Ramakrishna Mission in 1897 and formulated its ideology and goal. During the next two years he bought a site at Belur on the banks of the Ganga, constructed the buildings and established the Ramakrishna Math. He once again toured the West from January 1899 to December 1900.

Swami Vivekananda died on July4, 1902 at Belur Math near Calcutta.