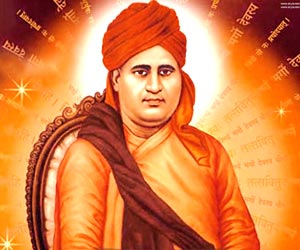 Swami Dayanand Saraswati's original name was Mool Shankar Tiwari. He was born in 1824 in Tankara, Gujarat in a rich family of Brahmins. As a child Dayanand was brought up under the strictest Brahmin rule, and at the age of eight was invested with the Sacred Thread (Upanayna). When he was fourteen his father took him to the temple on the occasion of Shivaratri. Dayanand had to fast and keep awake the whole night in obedience to Lord Shiva. In the night he saw a rat nibbling the offerings to the God and running over Shiva's body. He tried to find out from elders why this "God Almighty" could not defend himself against the menace of a petty mice, for which he was rebuked. This incident shattered Daya Nand Saraswati's faith in the idol worship and thereafter he refused to participate in the religious rites for the rest of his life.

Dayanand Saraswati undertook a tour of the entire county, made fiery speeches condemning the caste system, idolatry, and child marriages. He advocated the ideal age for a girl to be between 16 and 24, and for men between 25 and 40. Dayanand Saraswati was the first leader in the field of theology who welcomed the advances of sciences and technology. To him, the Vedas as the source book contain the seed of science, and to him, the Vedas advocate the philosophy of dynamic realism.

Dayanand Saraswati founded Arya Samaj in Mumbai in 1875 to promote social service. Arya Samaj, postulates in principle equal justice for all men and all nations, together with equality of the sexes. It repudiates a hereditary caste system, and only recognizes professions or guilds, suitable to the complementary aptitudes of men in society. He gave new interpretations to reform the stagnant Hindu thought through his book "Satyaprakash" (The Light of Truth). He profusely quoted the vedas and other religious texts to insist that salvation was not the only motto of a Hindu or Arya, as was believed. To lead a fruitful worldly life, working for a noble cause was important, and he preached that salvation was possible through social service.

Due to his radical thought, Swami Dayanand had acquired enemies from all spheres of life. On the occasion of Deepavali in 1883, he was a guest of the maharaja of Jodhpur. The king was a womanizer and Dayanand advised the king to lead a righteous life as a ruler, upsetting a mistress by the name of Nanhi Jan. That night Swami Dayanand was poisoned during the festival meal. Swami Dayanand Saraswati breathed his last chanting "Om".