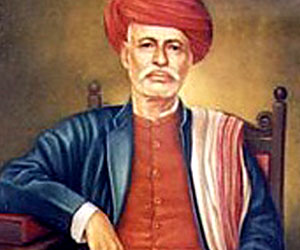 Born - 11 April 1827
Died - 28 November 1890
Achievements - He was a prominent activist, thinker and social reformer from the Indian state of Maharashtra during the 19th century. During his time, he tried bringing in positive renovations in the spheres of education, agriculture, caste system, social position of women et al.

Jyotirao Govindrao Phule, who was a prominent activist, thinker and social reformer from the Indian state of Maharashtra during the 19th century, was also famous by the name of Mahatma Jyotiba Phule. During his time, he tried bringing in positive renovations in the spheres of education, agriculture, caste system, social position of women et al. Out of everything that Phule ever did, he's most remembered for his selfless service to educate women and lower caste people.

Read on to get more info on Jyotirao Govindrao Phule, who after educating his wife, opened the first school for girls in India in August 1848. Later on, Phule set up the Satya Shodhak Samaj or the Society of Seekers of Truth along with Jyotirao, who was made its first president and treasurer in 1873. The real aim of this institute was to prevent exploitation and misbehavior to people from the low caste Shudra at the hands of the upper class Brahmins in the society.

Due to his relentless struggle to derive justice and equal rights for the farmers and the lower caste, Jyotirao Govindrao Phule is regarded as one of the most significant figure in the social reform movement in Maharashtra state during his time. Phule himself belonged to a humble family from the Mali caste in the city of Pune. His father Govindrao was a vegetable-vendor, whereas his mother died when he was just nine months old.

The life history of Jyotirao Govindrao Phule took a meaningful turn after his intelligence was detected by his Muslim and Christian neighbors who convinced his father to allow him to study at the local Scottish Mission's High School. Highly swayed by Thomas Paine's book 'Rights of Man', Phule developed an impeccable sense of social justice and grew passionately critical of the Indian caste system.

Interestingly, Mahatma Phule nurtured a favorable perspective on the British Rule in India because he thought it at least introduced the modern notions of justice and equality into the Indian society. Phule vehemently advocated widow-remarriage and even got a home built for housing upper caste widows during 1854. In order to set an example before the people, he opened his own house and let all make use of the well water without any prejudice.