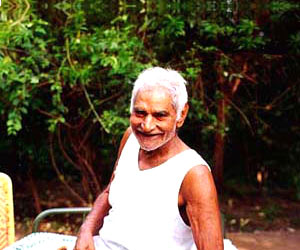 Born - 26 December 1914
Achievements - Baba Amte is one of the greatest social reformers India's ever had. He gave his lucrative career as barrister for social service. He was so great a person that he dedicated his entire life to the care and rehabilitation of leprosy patients. Often Baba Amte allowed his body to be used for carrying out experiments to grow leprosy germs.

Hailing from a well-to-do family of Jagirdars and born on 26 December in 1914 at Hinganghat in the Wardha district of the Maharashtra state, Murlidhar Devidas Amte is one of the most remembered Indian social reformers. Even though he was trained as a barrister and was operating a successful practice at Warora, yet he gave it all up to dedicate himself totally into social service when he noticed the poverty all around him. He was lovingly called Baba Amte.

Infact, the life history of Murlidhar Devidas Amte is full of touching incidents. He was so great a person that he dedicated his entire life to the care and rehabilitation of leprosy patients. Often Baba Amte allowed his body to be used for carrying out experiments to grow leprosy germs. His social project at Anandwan adjacent to Nagpur in the Indian state of Maharashtra is world renowned because it has done a lot to dismiss injustices against leprosy patients.

Read on more about the biography of Murlidhar Devidas Amte or Baba Amte. In the year 1985, Baba Amte started the Bharat Jodo or the Unite India movement beginning from Kanyakumari to Kashmir and then again from Gujarat to Arunachal Pradesh in the year 1988. The main objective was to reinstate peace and whip up environmental awareness. In the year 1990, Baba left Anandwan to reside alongside river Narmada with the objective to fight against social injustice to local inhabitants there.

Baba Amte was honored with numerous national and international awards for his selfless service to the society his entire life. The Government of India presented him with the Padma Shree Award in the year 1971 and then the Padma Vibhushan in the year 1986. The Welfare of the Disabled award was presented to him in the year 1986 and Gandhi Peace Prize in 1999. Among the host of international awards Baba Amte got were Damien-Dutton Award in 1983, the Ramon Magsaysay Award for Public Service in 1985 and so on.