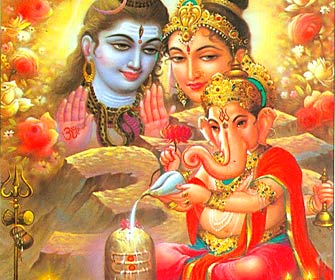 There are many stories of Lord Ganesha regarding his origin and various others which tell about the nature and traits of his character. Ganesha is known as the god of wisdom, literature and worldly success. He is known as the eldest son of Lord Shiva and Parvati (Uma), younger brother being Kartikay. Here are some legends associated with lord Ganesha.

The Elephant Head - Story of Ganesha
This story is about Lord Ganesha's birth and how he gets the head of an elephant. Once upon a time, Parvati was going to take the bath and before going, she made a boy out of the dirt of her body ,to guard the entrance of her house. She asked him not to allow anyone inside .After saying this, she went inside to take the bath. After this lord shiva came himself to meet his consort and he was quite thirsty. Ganesha stopped him at the door as he was unable to recognize his father ,Lord Shiva. Lord Ganesha was beheaded by Shiva, who took him as an outsider, when Ganesha was trying to defend his mother's bath.

When Parvati came to know about this, she persuaded Shiva, to restore Ganesha to life. Shiva ordered his servants (Gana) to bring the head of any creature that they come across first. An elephant, the wisest of animals, appeared and became the spontaneous donor in the head transplant of Ganesha. Shiva attached the head of the elephant to the torso of Ganesha. After looking at the child (Ganesha), Parvati asked Shiva that who will consider this god with the face of an elephant.

Understanding Parvati's viewpoint, Shiva blessed the child, Ganesha that he will be the lord of beginning and people will worship him first, before any other God in any kind of undertaking. He ordained that the annual worship of Ganesha, should take place on the fourth day of the bright half of Bhadrapada (August-September).

Who is elder? Ganesha or Kartikay
This is another interesting story of Lord Ganesha.Once Ganesha and Kartikay got into an argument as who was the elder of the two. The matter was told to Lord Shiva for an answer. Lord Shiva asked that whoever would travel around the world and come out first had the right to be the elder of two. Lord Kartikay flew off on his vehicle, the peacock, to take the round of the world. But Ganesha went round his parents and asked for the reward of his success.

Lord Shiva said: "Beloved and wise -Ganesha! You did not go round the world". Ganesha replied: "No, but I went round my parents. My parents symbolize the entire world.'' The argument was settled in favour of Ganesha and thereafter recognized as the elder of the two brothers. Ganesha got a fruit as reward from his mother Parvati for this.

Ganesha and His Love for Laddoo
Lord Ganesha is very fond of Laddoo (Modaka - a sweet delicacy). Once upon a day of Ganesha Puja, Ganesha went from house to house and accepted the offerings of laddoo. He stuffed himself to the capacity and decided to take a ride on his mouse at night. Along the moonlit road they got to see a large snake and the troubled rat stumbled, with the consequence Ganpati fell down .He hit the ground hard and as a result his stomach burst open. All the laddoos came out but Ganesha again stuffed them into his stomach. He caught the snake and tied it round his belly.
Moon witnessed the whole event and laughed heartily. Lord Ganesha lost his temper and furiously looked about for something to throw at his tormentor. Getting nothing, he pulled out one of his tusks and hurled it at the moon. He cursed the moon that no one should look at the moon on the day of Ganesha Puja .If anyone would look at it , he will get a bad name ,criticism or ill reputation. If anyone gets to see the moon by chance, he would be free from that bad name or blame, after hearing the story of Lord Krishna's clearing, his personality in respect of the Syamantaka jewel. Thus, Ganesha was happy to proclaim this.