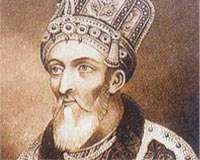 Personal Life
Akbar Shah Saani II, father of Bahadur Shah Zafar, had a difficult time holding on to his Mughal Empire under the accelerating control of British Empire over India. The East India Company even took off his name and details from the currency of India of that time. He had to give up his throne but he was not in favor of Zafar succeeding him. His queen, Mumtaz Begum, was pressurizing him to make her son, Mirza Jahangir, as the king after him. But before any of that could happen, Mirza Jahangir had got into great conflict with the British Empire and the British made sure that did not happen.

Major Work
As An Emperor: Under the new rule by British Empire, Bahadur Shah Zafar did not have a lot of land under his control, just a small empire in Delhi. He was allowed to exhibit his power over a finite amount of land and collect taxes from there. He was also allowed to have some pension. This was because he posed no threat to the British Empire in India, mainly because Zafar was not very ambitious. He was the last and the weakest Mughal emperor. Even then he was considered a hero and was portrayed like one in many Hindi films. A road has been named in his honor in New Delhi, India. His valuable contribution in the Indian freedom struggle is very much acknowledged and he is known as a nationalist in modern India.

He was not a very able emperor and his empire had a lot of chaos and unrest. After the Indian rebellion of 1857, he was defeated and was sent on an exile in Rangoon. To be the Commander-in-Chief of the mutiny army against the British Empire costed him a lot; he was presented with the decapitated heads of his own sons by Major Hodson.

As A Poet: Regarded as one of the greatest Urdu poets in the history of India, Bahadur Shah Zafar wrote a large number of Urdu Ghazals most of which were lost during wars fought in the year 1857. Yet, many of them were saved and were later on compiled as Kulliyat-I-Zafar. His Ghazals are a beautiful collection of words that spell magic and are read with awe and admiration even today. In his court, there boomed many Urdu poets like Ghalib, Dagh, Mumin and Zauq. It is said that during his exile, he was not even given a pen and paper to jot down his thoughts. He used to write his poetry on the walls with black ink.

As A Religious Man: Zafar was a follower of Sufism. He used to speak the message of sufisim and used to take disciples under him. The newspaper of those times called the Delhi Urdu Akhbaar declared him as a Sufi saint. In his youth, Zafar used to dress up very normally even when he could have dressed up lavishly like the other members of his royal family. He tried to live ad be like a poor scholar. He acquired the highest teachings in the mystical studies of Sufism. In the course of following Sufism with his full dedication, he also got attracted to the magical and superstitious side of Sufism. He thought himself to be spiritually powerful enough to cure people of their problems and despair. He used to practice the charms to ward off evil. He used to often get involved in performing rites to cleanse himself of the effects of the evil eye. He used to keep pirs, magicians and Hindu astrologers in his court, and used to take their advice on important matters. Sacrifices of domestic animals and ample donation to the poor and unfortunate were regularly made to ward off the evil. Zafar was of the view that Hinduism and Islam are essentially made of the same element. He followed this philosophy in his own empire by having a composite culture, including the Hindus and Muslims in his court. He used to celebrate Hindu festivals in his court. For example, during the festival of Holi he used to spray colors on his wives, friends and relatives and during Dusshera he used to distribute gifts to his Hindu officers and courtiers. All of this is to present a picture of how Zafar was sensitive towards Hindu religion.