Amir Khusro has made immense contribution in literature and music and was associated with the royal empires of more than seven rulers of Delhi. Know more about his life in this brief biography.
Home : Indian Literature : Urdu : Poets : Amir Khusro

Amir Khusro, one of the most versatile personalities of medieval India, was born in 1253 in a place called Patiyali, Uttar Pradesh. His real name was Ab'ul Hasan Yamin al-Din Khusrow whereas Amir Khusro was his pen name. Also known as Amir Khusro Dehlavi, this creative classical poet was associated with the royal empires of more than seven rulers of Delhi. The life history of Amir Khusrao is truly an inspiring one and he is considered to be one of the first recorded Indian dignitaries who are also a household name. Known for his immense contribution in literature and music, this legendary personality was born of a Turkish father and an Indian mother in a village in India. To know more about Khursro, continue to read this insightful biography on him.

Personal Life
Khusro lost his father at a young age and then moved in with his maternal grandparents. His grandfather served as an attendance master of soldiers at the royal palace of Emperor Ghayasuddin Balban. Khusro was exposed to all famous literary figures of his time when he accompanied his grandfather to the royal courts to attend the private congregations. This inspired him to take up poetry and indulge in fine arts like music. He also learnt horse riding and received training in martial arts. The famous Sufi saint Hazrat Nizamuddin Auliya was his spiritual mentor.

Major Work
Amir Khusro is often acknowledged for creating Khayal of north Indian classical music known as Hindustani. He modified raga Dhrupad and added Persian tunes and beats to it. He created Qawali on the likes of bhajans. The poems he wrote were in Persian and a combination of Bhojpuri and Persian, which he called as Hindvi. 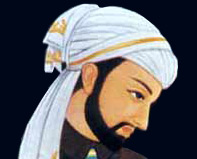 These poems later were developed into Hindi and Urdu.

Probably Khayal originated from Qawalis that he created on the lines of Bhajans. He wrote poetry in Persian as well as what he called Hindvi--a combination of local Bhojpuri and Persian, which later evolved into Hindi and Urdu. Many of his poems are even today used in Hindustani classical as bandishes and as Ghazals by Ghazal singers.

A Royal Poet: Khusro was a Royal poet under Sultan Aalauddin. Aalauddin due to his righteous nature and for the moral wellness his empire banned all the intoxicants from his kingdom. Khusro contributed in Sultan's chastisement movement. He took the responsibility of discipleship. Under his watch he accepted all kinds of people--people who were rich or poor, high in social status or low, nobles or beggars, educated or uneducated, fortunate or unfortunate, city people or rustics, soldiers or priests, murids, etc. Khusro helped people, equally, to live a clean life and abstain themselves from morally harmful habits. When people did commit any sin, then they could approach Khusro and confess. Khusro helped them to get back on the right track and renewed their discipleship. He started the new regime for daily prayers and everybody started following it. Whether it was a man or woman or young child, everyone started gathering together to offer daily prayers. This even included the late morning prayers. Even the high end of the society --people with money and status started attending these prayers. This lot included royal secretaries, clerks, sepoys, slaves, etc. Because of Khusro's praying sessions or barakah, people started concentrating on the pious things and got involved in tasawwuf or mysticism of life. Some of them even turned to renunciation or tark and got involved in devoutness. Even towards the end of Sultan Alauddin's sovereignty nobody in his kingdom gave into the practice of drinking liquor or gambling or taking to any indecent ways of living. Everybody lived in complete harmony and followed the goodness taught by the religion. The effects of teachings of Khusro was so strong and widespread that it is said that even the shop keeper stopped lying, cheating and under-weighing to make more profits. He even entertained the scholars from all walks of life and discussed mysticism with them. These discussions were mainly based on books on mysticism from those times like: Fawaid-ul-Fuwad, Qut-ul-Uloom, Kashif-ul-Mahjub, Awarif and Malfuzat of Hazrat Nizamussin Aulia. People started to self-educate themselves after being in the company of Khusro, on topics like self-control and renunciation. Most of the people took to spiritual style of life and followed the rules and regulation of that life very strictly.